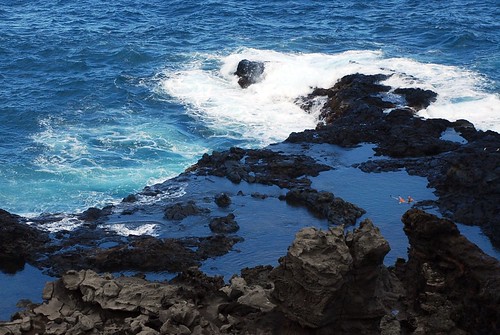 This morning, we went to Kapalua Beach to brunch at Gazebo on the beach. Afterward, we headed north for a Sunday drive.

We saw Olivine Pools after stopping out the Nakalele Blowhole, in Northwest Maui. 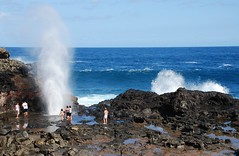 For dinner, we went back towards Kapalua for Sansei Sushi. 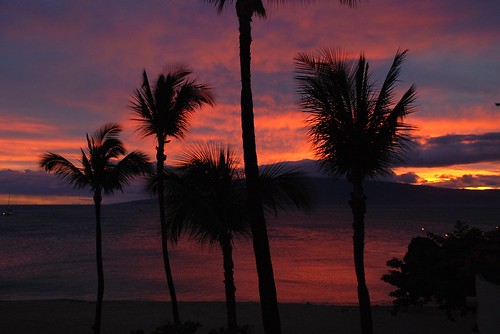 Today we actually ventured out twice. Once for grocery-store provisions and lunch at Aloha Mixed Grill, and then later for dinner in downtown Lahaina at Cilantro. Our mixed-plate lunch was meh (brown gravy saved the day), but dinner was fantastic and crazy inexpensive for Lahaina. For days after, we talked about heading back for more Mother Clucker Flautas takeout with roasted jalapeno and honey sauce.

This is before dinner, from our balcony. Sunset conditions were perfect. 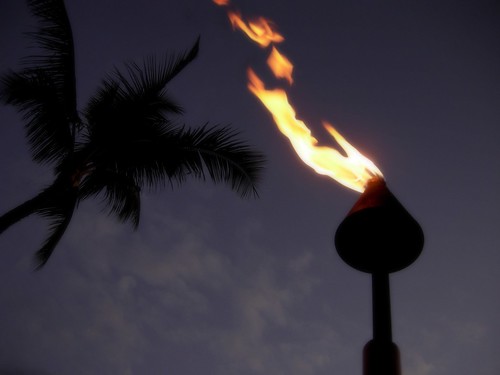 Our plan for our week was to do as little as possible. Today perfectly met its purpose — we left our resort once to walk to a bookstore for laziness provisions. We even had all meals on-site, and lunch was brought directly to our lounging area. We were closest to Black Rock during our stay, so we had a front row seat to watch the nightly diver after he lit all the torches in his ceremony.

I spent most of the day staring at the sky. 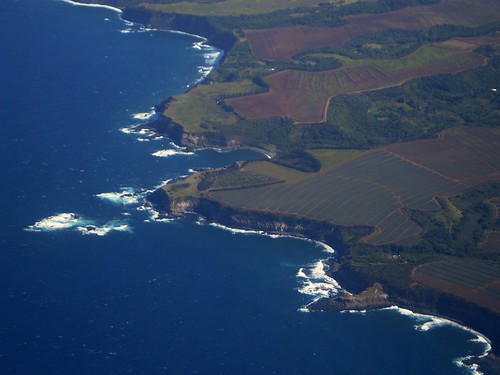 For Thanksgiving, we traveled to Maui. We arrived mid-day and went for dinner in Lahaina. After the sun set, we returned to Ka’anapali Beach for a walk.

While we watched the waves roll in, Mr. T asked, “Will you marry me?” 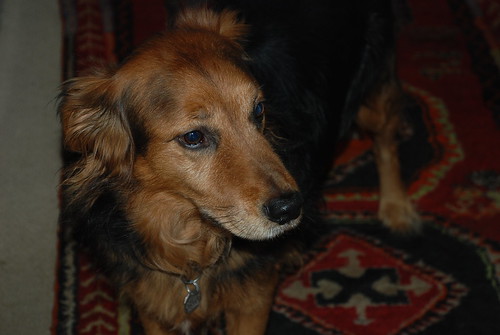 For the Baron, my running shoes = the slightest chance for a walk.

Sometimes I put them on while doing chores around the house, just to see his Noble Highness get all worked up at the possibilities. Here, he’s pretending he wasn’t stretching and yawning and looking coy in anticipation 30 seconds ago. He also fronts like he wasn’t jumping into the air whenever I made the slightest move towards the front door. No sirree.

Only his lightly furrowed brow gives it away. 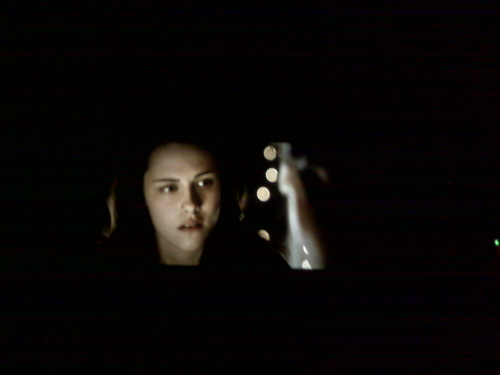 We went to see Twilight. I enjoyed it, I think this is the way to go with the WHOLE franchise. 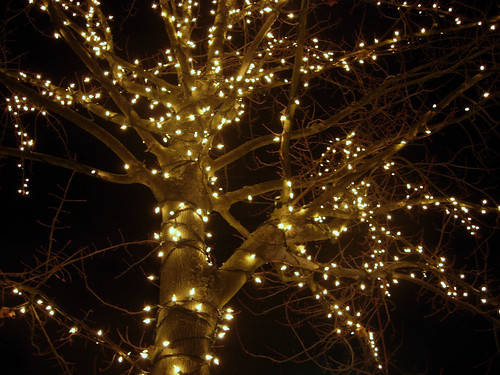 Twice today, I’ve wondered why so little negative reaction to Christmas gearing up? I shouldn’t question it. Same for my mood towards the Fall arrival — I wondered, have I gone native? Turns out, local weather smarty says we’re having October weather now and it’s making for a spectacular Fall. I like this easing into Winter bit, combined with my morning light-box devotion. HUGE relief.

I ran my farthest since the marathon today — 4.6 miles. Good for my lazybones. Followed it up with Mr. T making a delicious dinner, then card shopping, then whipping up a batch of Sweet Potato Crack. Next I’ll watch my long-reserved Valley of the Dolls. Storing up my energy for Twilight viewing tomorrow. 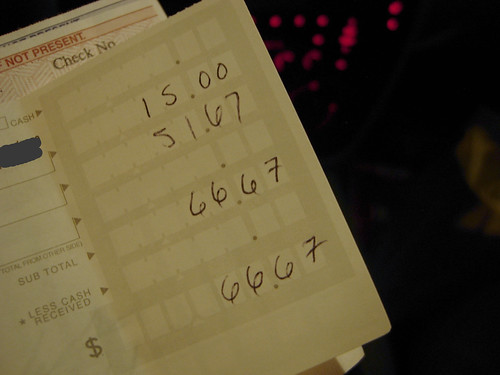 Am I the only one who rarely has chance to visit a bank? Anyhow, random errand led me to this.

After ongoing socializing for weeks, I am taking advantage of some downtime tonight. Soup’s on! 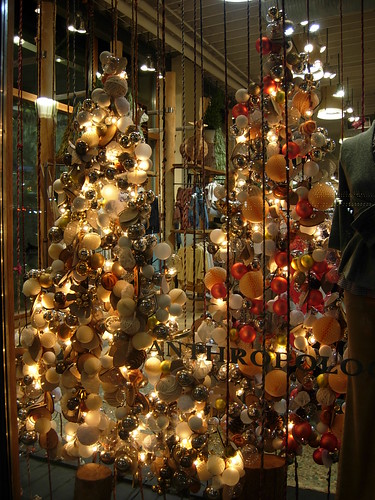 I noticed my first Xmas lights near Greenlake this week. Tonight, I had returns to make to U-Village, and saw Anthropologie’s all ready for the upcoming onslaught. Or will there be one? I’m not sure which I’m hoping will happen as I hate stores between Thanksgiving and New Year’s. As a society, less materialistic would be a Good Thing, but since it’s more forced…

I liked this article in the NYTimes, regarding massive returns right now — it backed up another story I heard on NPR this week. My participation in revolving returns is nothing new, lean economy or fat. 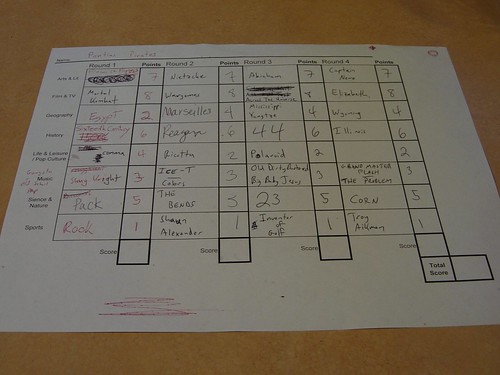 Trivia was painful this week. The 1st round of four was a big zero for us. But, our bank started with $43, we’re only down by this week’s entry fees. The misc round was Gangsta Rap and I’m a disappointed none of my faves came up. And also? The HQ of Interpol is not Marseilles, but Lyon. Duh. 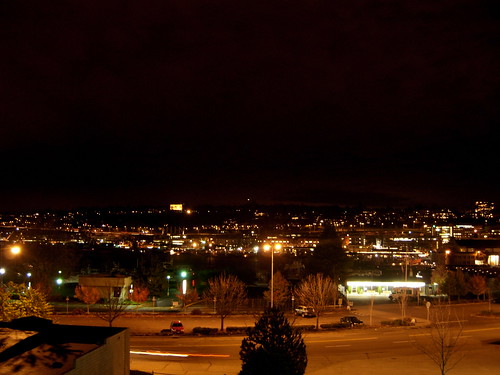 Had a meeting tonight in South Lake Union/Queen Anne and grabbed this on my way back to ze car.

I met a woman from Vanderbilt tonight. We bonded over our SEC pasts. Speaking of which, how about that Saturday LSU comeback, from 31-3 to 40-31 in the final quarter? 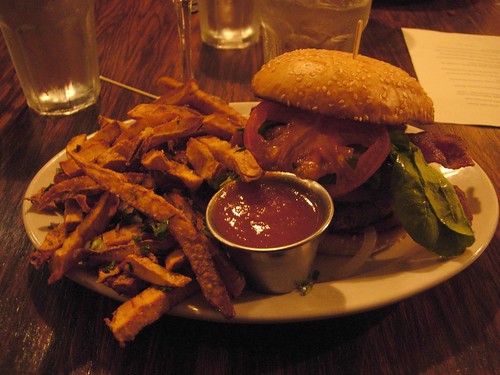 A group of food Enthusiasts here in Seattle hit up a different burger place monthly and share their exploits online. They don’t always go in a big group, but they make the effort. I’ve known about them for years and last Thursday night, one of the prime instigators offered to head to Pig ‘n Whistle with me. And so tonight, we went along with Mr. T and a friend who I knew from my Cookbook group/club. As it happened she is already pals with the BOMC instigator who invited me in the first place.

My burger was great, Mr. T’s fried chicken was fantastic, I was thrilled to get sweet potato fries as a side and I finally got to try Smelt (can’t recall having eaten it before). Thumbs up on all food counts…except for the Sazeracs — sugared rims and shaken have no place near them, and I’d never seen one in a martini glass before.

Here’s a snap of the smelt: 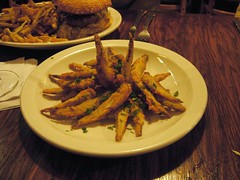 And the fried chicken: 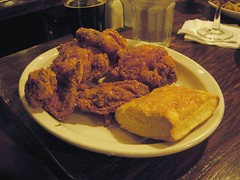 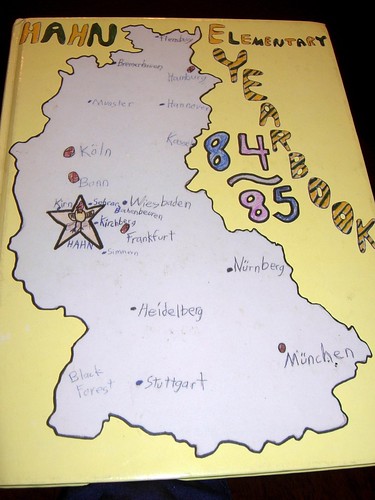 Mr. T’s parents visited this evening — we all went out to the Latona Pub, a place close to ours and a favorite of the Mister’s. His mother brought a few more things for Mr. T’s ongoing safekeeping and one was his elementary school yearbook. I especially like the hand-drawn map with the turkey/star denoting their hometown base, along the large “West Germany” across the back. How often do you see that now?

I wonder if my Mom still says West Germany. (My parents and bro spent time there before I was born.) She lived just 30 minutes north of the turkey. 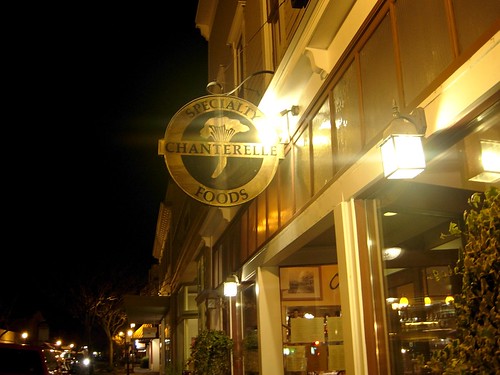 Our very good friend Toad is up another year. His wife, Cynthia, planned his party for Chanterelle in Edmonds. I was just there last week for the Iran lecture, but I love Edmonds and its city center so I was excited to head right back.

We all started with Tomato Bisque: fantastic. I was worried about ordering chicken, but was drawn in by the prosciutto and gouda sauce that came with. My dish was FABULOUS. We also tried carrot cake and a few other things, but the main was my standout of the evening. 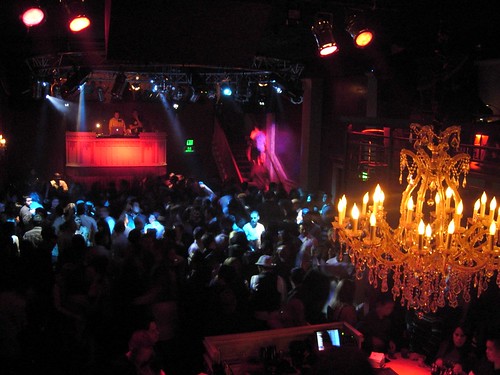 Weekend nights in Pioneer Square are usually not my bag. But, some of the kickballers & bowlers were headed there and I took their offer to join and show our bowling captain C’s friends from NC a good Seattle time. We started at Marcus’ Martini Heaven. C filed for divorce last week and laughed when I told her the last time I was at Marcus’ was the month my divorce began. Four years ago now?

Ah, breakups, such a process.

Around 11ish, we went to Trinity where C had reserved VIP for us. And all that that entails. I hung out for a bit, until I was summoned via text around 12:30 to see Shanda & Mik at Goldie’s in Wallingford. Mr. T then joined up with us for darts but later we both declined the after-parties. 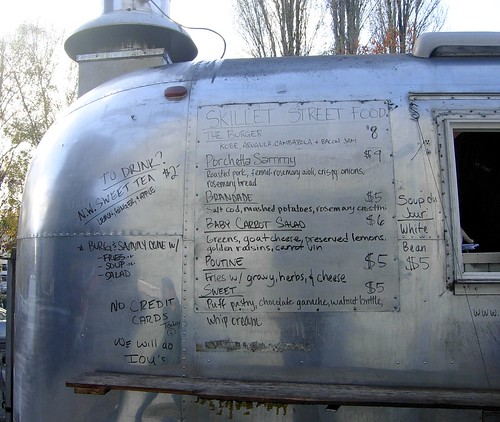 Porchetta sandwich from Skillet — oh my heck, so much oil. The first bite was divine, despite the fact that I’ll never order this again.

Wine-tasting on the clock, which meant there was excellent cheese and fruit for that late afternoon snack.

Dinner at a friend’s, met some new Louisiana expats.

Met up with Traca and her gang of 6 in Columbia City after the Secret Stash Salt Party at Gather. We convened at El Sombrero and now I’m on this salsa bender. Have a feeling this’ll go for weeks. Made more plans for joining up for their Burger of the Month excursion next week…can’t wait, these people are good times. 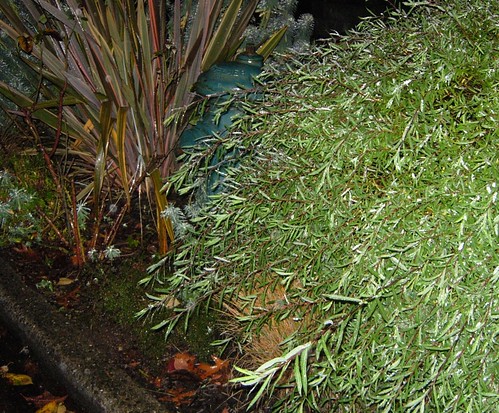 Why yes, I am annoyed by getting a ticket while out for trivia. When we parked it was raining and I thought I was good. With a flash picture, of course now I see the hydrant–this area has a silly number of hydrants and zones. It’s been two years since my last ticket; a “neighbor complaint” for my car being in my driveway, “impeding the sidewalk.” People do it constantly (from my observations while running) but our streetwatch sidewalk vigilante was inconsistent after our first 6 months here. I’m still bugged about that mostly unresolved mystery which occurred right around the time we also heard one complaining at the street block party about new folks moving in with their fancy salaries and raising their property taxes. (We wondered, oh, has your house value not gone up in 10 years?)

Whew, I feel better. For the record, 98% of the people on my street are very, very cool people.

Well, we won first place. $1 per person, our team of 6 (the max per team) won back $43. This week’s miscellaneous round was Bull Durham. We are brushing up on our gangsta rap for next week’s misc round. 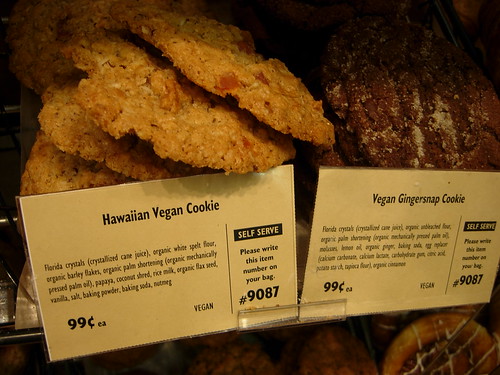 Tonight we’re going to neighborhood trivia and I hope to use that for today’s true POTD, but I hate leaving the 11th blank. Some things conspired to knock me out of a photo state of mind yesterday. On the plus side for the day, we visited friends in Redmond after dinner where we watched the Inside Man. That coulda been a picture opportunity, somehow. Especially the part where the cat ran off with the fancy gouda from the dining table. We’d been preoccupied with Denzel and Clive before we saw them circling the large hunk on the floor.

The distractedness continued from yesterday into today and I semi-remedied my state mid-afternoon with caffeine and sugar. Still no Chocolate Ginger Cookies resurfaced at el PCC, but they had these “Hawaiian” cookies. The coconut and papaya are the only Hawaiian characteristics I see and those are not the first food items I think of when I think of the hula state thanks to my Hawaiian compadres. I guess incorporating spam and rice would disqualify the veganness. (I did not get these. Snickerdoodle with butter, instead.)

I wish I was in Hawaii. Soon, my pretties. Soon. 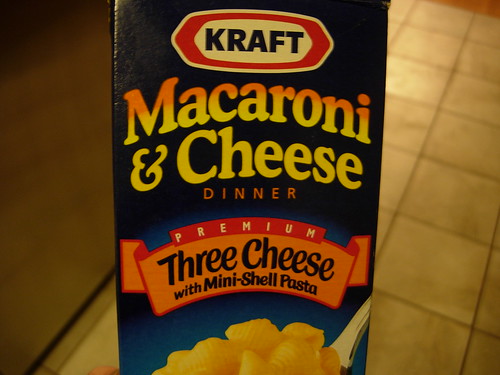 A few years back, I whipped up a batch of Kraft Macaroni & Cheese one wintry afternoon. It was a let-down. Well, the other day, this caught my eye during a trip where I’d broken the “Never go to the grocery store hungry” rule. It was a buck, and PREMIUM! I sprinkled some frou-frou Fleur de Sel de Noirmoutier on top, along with fresh cracked pepper. End result: met my expectations perfectly. Perfect Monday Night Dinner. I followed it up with Daymented’s Hello Dollies. 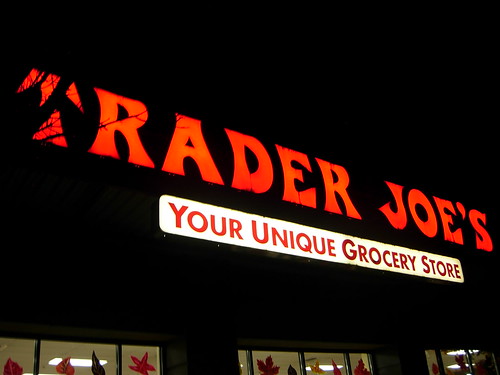 This month, I hosted our discussion of Under the Banner of Heaven by Jon Krakauer. Around 5 PM, I made the trip down to the Trader Joe’s for provisions. My favorite find of the night: veggie gyoza.

The book was okay and we had a full dinner-table discussion. Note to self: get a few more chairs or stools.

I’m already well into next month’s selection (Shopgirl) and am loving it so far.