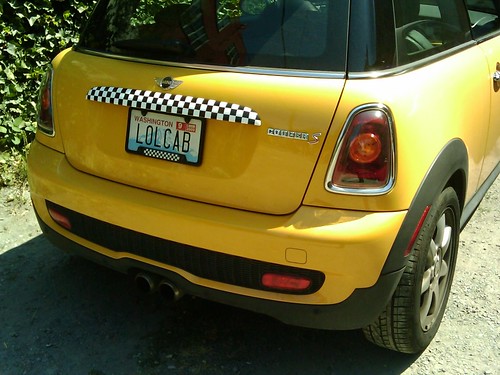 On my way to meet Debi for lunch at 35th St Bistro, I spotted this & had to snap a picture. It wasn’t parked far from where I took this a few years ago: 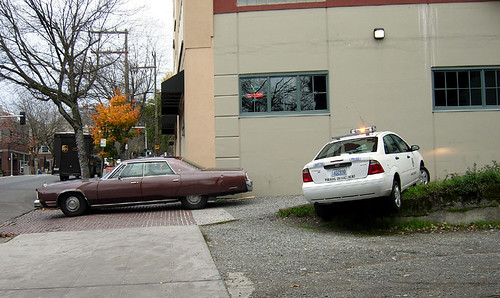 (Click the image to see the story of parking enforcement gone awry.)

Lunch was good, but I am a sucker for French tartines. Service underwhelming. 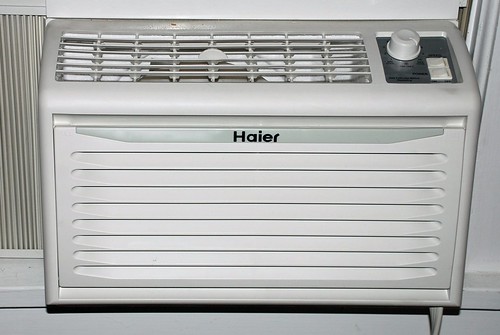 Yesterday evening was spectacular, but I left out the part mid-day where I started losing my mind. I could feel my brain melting. My house was an oven – this was extraordinarily unsettling. The only relief seemed to be at work or in my car. Neither is for relaxation.

Someone on the twits told me there was an AC at the Wallingford Bartell Drug. At lunch, after mailing a package I stopped in two buy the 3rd to last left in store.

We were too exhausted to install the AC last night, but Mr. T set it up before I got home from work. Our room was like walking into a refrigerator. Nothing, I tell you, nothing feels better than a cool room on a hot day. 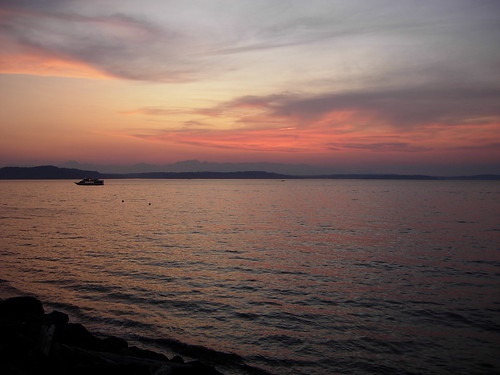 This evening was spectacular.

Today the temps officially reached 103. I saw my car’s gauge reach 107. I went to Vanessa’s for her Wednesday night class, and it felt 20 degrees cooler on Alki Beach. Around 7, tons of friends started arriving — a great, great night. 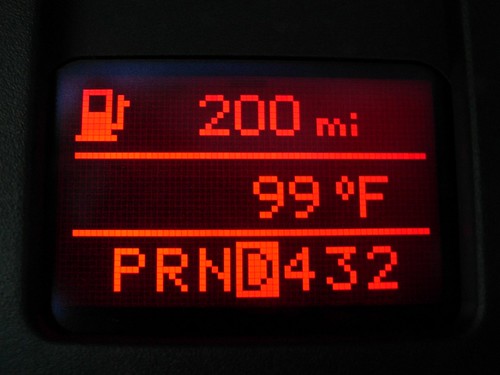 Last month, I told Mr. T that I wanted to be sick of the heat by September. This picture was when I was parked in the shade. Witnessed higher numbers, but I was driving at the mo.

I visited a friend downtown and after an hour, headed home because I was all woo-zay. The weather can cool down now.

Also of note: I had the best lunch with the lovely & awesome Sara Astruc at Homegrown. It makes me so happy she’s here! In Seattle! 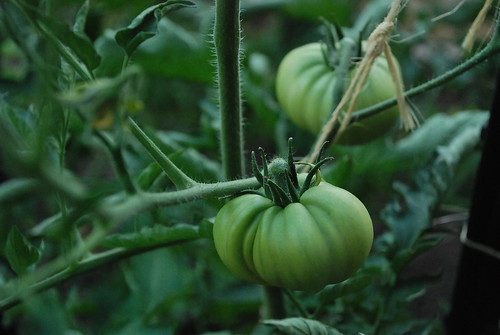 This tomato bush suffered fallen evergreen branches last month, but Mr. T got it back up and running. Excited to see success!

It started getting hot today. Someone had one of these in the backyard: 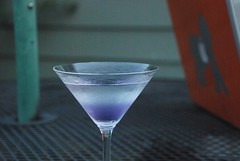 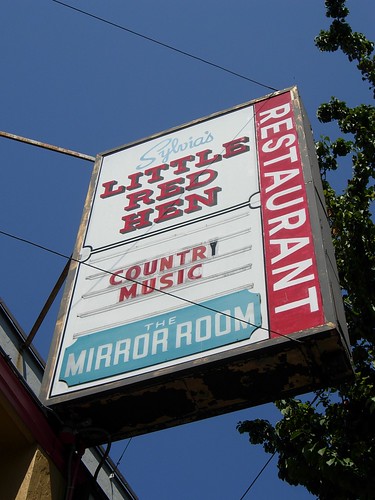 Years ago, a coworker told me I’d love the Little Red Hen in Greenlake. The hen’s known for late night country dancing, which he assumed I’d love being from the South. I didn’t bother to tell him I’d gone country dancing once outside of P.E. class, in Chicago. He thought the South only had one accent anyhow.

Sidebar: In 9th grade, we had an 8-week unit on square dancing. No one was admitting it was any fun at the time. Our P.E. teacher happened to be a former football coach and a current southern Baptist preacher. One of my whipsmart fellow classmates took advantage of his preconceived notions and told him that in her Jewish tradition, it was against her religion to dance in anything but circles. She got to walk the track while we do-si-doed. (She’s an awesome D.C. lawyer now.)

Back to today. We met up with Jim & Laura and A&B at the Little Red Hen in Greenlake. Around 11, we wandered through the cowboy door and into the dark bar to grab a table. It was quiet & cool — perfect for a heat wave. The bartender was gruff, just the way it should be. He warmed up. 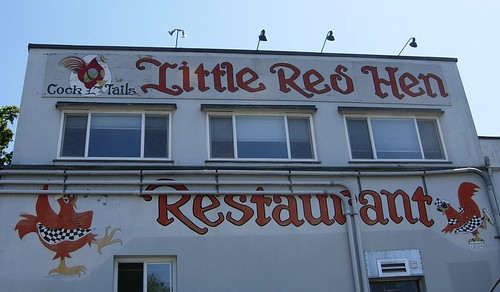 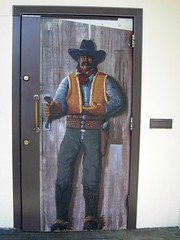 Mr. T ordered Chicken Fried Steak (so good!), I got the Ham Benedict (good, but no chicken fried!), A got the CA Benedict, and I sort of lost track of what everyone else got. Regardless, I completely enjoyed my brunch and for the 2 of us, spent $20. The cook even came out to ask how we liked our breakfasts.

I’d go back for dancing, too. 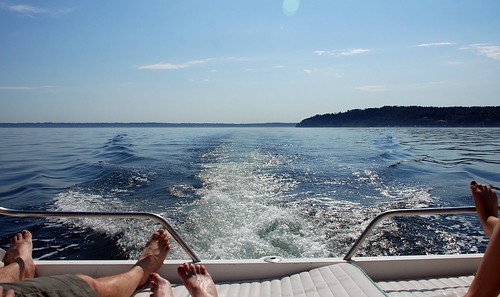 Before 8 PM, today was the best day of my Summer. We went boating with Keaver, a friend of his, and Nick. We stuck to the Sound, going around Commencement Bay, past Tacoma, then parked over between Maury Island and Vashon while we ate and generally lazed out.

Friends from Paris and San Francisco were visiting this weekend — after 8, I dropped Mr. T off to hang out with them while I went home to get some things done. When I walked in the house, the back door was wide open and The Baron was gone. I looked everywhere for him, walked the streets, called Mr. T to come home to help me find him. Laura ended up driving him back right away (bless you Laura!). All I could figure was that he was scared by the thunder at dusk.

Mr. T got ready to head out on his scooter as night fell. The Baron must have heard me shouting all over the neighborhood because when Mr. T opened the front door, he was sitting there patiently, panting away on the porch.

And then I walked to Peaks for frozen custard to smother my adrenalin rush.

Still, an amazing day on the water. 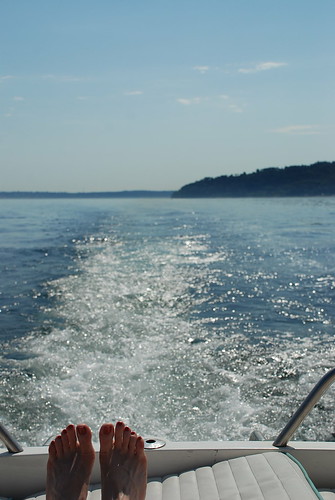 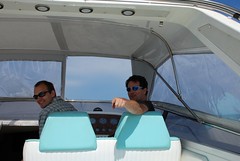 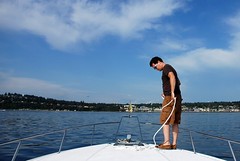 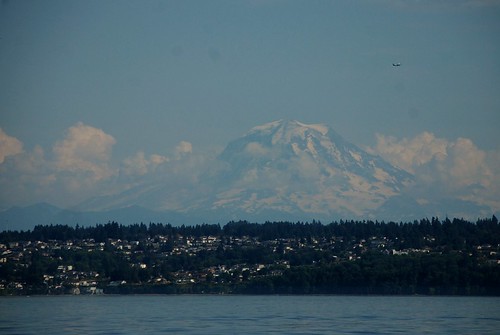 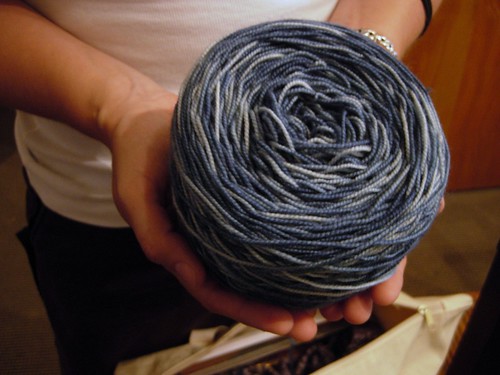 Tonight, I was back in West Seattle with friends at Vanessa’s. We talked, ate, walked on the beach and hung around til sunset.

I learned a new word today: yarncake. This is Susan‘s pictured above. (Next time, I’ll try to take a picture like this earlier in the evening.) She’s in the midst of the sock frenzy that I hear the Ravelrians are stoking lately. These blues are the best! Also, Susan bought flowers, pictured here. 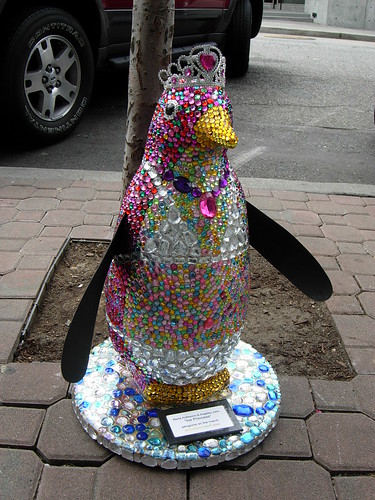 Today is in 3 parts:
Part 1: What a weird start today. Up early to go to the dentist. Got there, and now I know why I never received a reminder card nor a call. The place had sheriff notices and whatnot and I figured that was that.

If anyone knows what happened with Craig Bernhart of Mountlake Terrace’s Family Dental Clinic, I’d love to find out about that. And maybe get my records.

Part 2: A former colleague came to visit at lunchtime. We went to Blue Moon Burgers. I told him about the penguin invasion (above picture is of one of the Penguins on the March). We talked and talked. And talked some more. Dentists, Palin, election, catching up, Tahoe, the Caribbean.

Part 3: In the evening, I headed downtown for Traca’s event at the W Seattle: a viewing of The End of the Line followed by a Sustainable Seafood Panel. The event sold out in a day – glad I got in early. (Good coverage was in many places, including Leslie’s Fresh Picked Seattle)

What I learned between the film and the panel with Becky Selengut, Jon Rowley, Casson Trenor and Shauna MacKinnon:

The collapse of world fisheries is a huge threat, devastating communities once the fish are gone. We are about 40 years from complete loss. See also: the Newfoundland cod collapse in the 1990s.

The collapse was miscalculated previously, thanks to false data from China.

There are things we can do to help stocks replenish. The Monterey Bay Aquarium has great educational outreach efforts. You don’t have to go veggie, just make better choices. They’ve got an iPhone app to help while shopping, too.

Eat lower on the food chain — fish like mackerel, mussels, anchovies, sardines are all more sustainable, less toxic, and healthier — more of the good omegas. Look for the silver.

It takes 20 lbs. of the small fish to produce 1 lb. of bluefin tuna.

Shellfish are another good option in many cases. Especially North American varieties.

Speaking of North America, we’re ahead of Europe in sustainable fishing habits. Way ahead of Asia.

There is no such thing as certified organic fish. Legally-speaking.

The local PCC is considered the greenest grocer in the United States, by Greenpeace. If you’re local in Seattle and confused about what’s okay to buy – they are trustworthy in products they sell. (Just, uh, avoid the vegan baked goods. shudder)

I am not exactly a treehugger. But after a little education it would be unconscionable to continue my frequent habit of routinely ordering spicy tuna at sushi. Time to limit it to being a treat and develop new tastes. 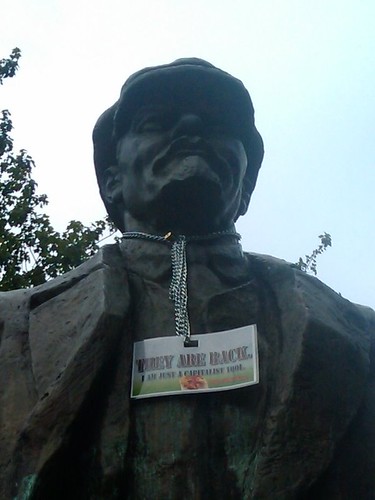 The powers that be had some important things to say, which were followed by late afternoon at The Ballroom. I noticed this sign around Lenin’s neck on my way back to the office.

Here’s more about the Lenin Statue from Roadside America.
—-
Earlier in the morning, a stranger visited me at my desk. She’d tracked me down to gently deliver sad news about a friend.

I wanted to find something beautiful to photograph to commemorate, but the day just seemed so gray.

R.I.P., LAF. You were one of the kindest people I’ve ever met. I am sorry you’re gone. 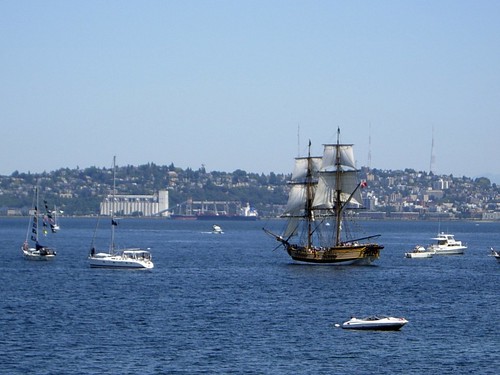 We started our day at Vanessa’s. Traffic was so atrocious that in lieu of eating first, we headed down Alki Beach to catch the pirates at their landing. Seems the buccaneers were held up heading south on I-5 too, so we retreated back to V’s to brunch and watch from her balcony. But not before snapping spectator pictures. 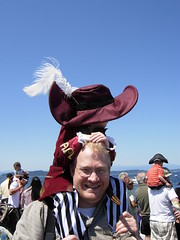 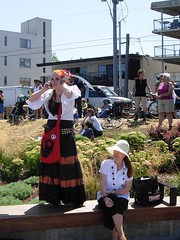 Next, we headed to Rand’s 30th birthday afternoon at the racetrack. 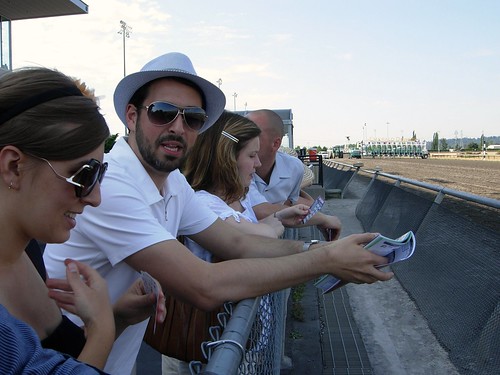 I got so excited as we arrived at Emerald Downs. I wore my floppy hat, there was gonna be lemonade, good friends…oh the anticipation! Would I win back my $2? Would R like his pimp pirate hat and eye patch we’d scored for him on the beach? 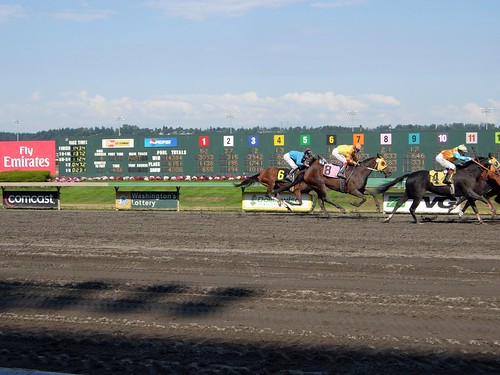 Oops, I meant to snap this about 2 seconds earlier.

We spent hours placing bets and enjoying the company. The pimp pirate hat from me & V, et al, was well-received. I bet every round, usually rewarding clever names. My favorite was Dixie Doodle Dude with Luke Stallwalker as runner-up. Between Mr. T & me, we earned back about 50% of the outlay…okay fine, Mr. T was the only one who won anything and he placed it on the long shot of the day. Let that be a lesson!

After a brief break, we headed over to their place for great food and chitchat. Happy Birthday, R!

Geraldine is the BEST baker. Here’s the cake she made for her mister. 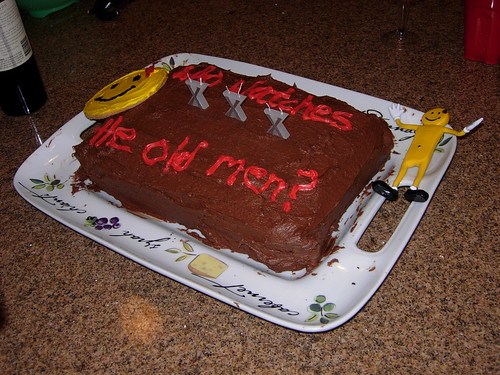 Who Watches the Old Men? Who? 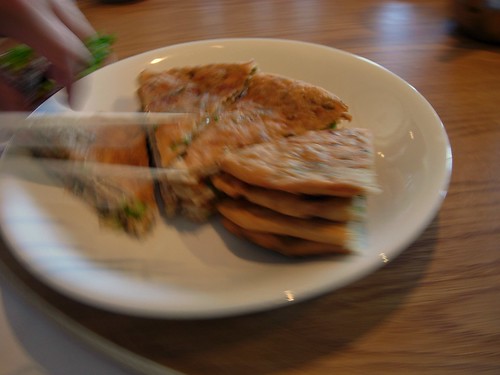 The food moved fast with this gang.

Last week, a few of us missed out on a dinner at Jack’s Tapas, Mainly Chinese. Tonight, we were supposed to have a makeup session, but when we arrived realized why they hadn’t called back to confirm my reservation (they usually don’t need them). They were closed for a wedding but their site hadn’t reflected that a few days before. So our voracious group of 11 convened a mile north at Chiang’s on Lake City Way instead. 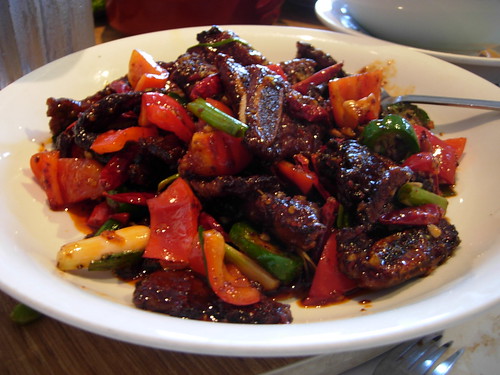 We had so. much. food. My favorites were the hand-shaved noodles, the short ribs (pictured above) and the Spicy Fish “on Roman Lettuce.” Traca snapped a picture of our order here which was:
Green Onion pancakes
Leek Dumplings
Sea Cucumber
Short Rib with Triple Chili
Spicy Fish on “Roman” Lettuce
Enoki Black Mushroom with bean curd
Shanghai Style Pan Noodles
Homemade Noodles with ground pork
Shredded Pork with squid and yellow leeks
Tea-smoked Duck

Afterward, Traca stopped by. We talked for hours. 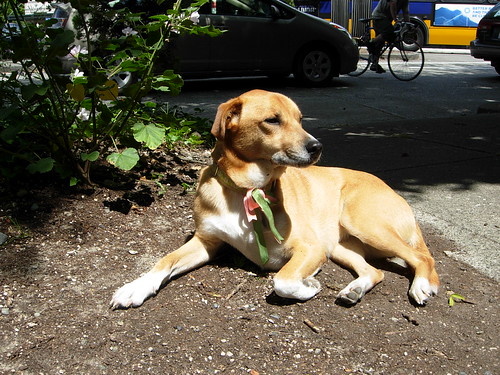 My good friend Carey visited me in Fremont today for lunch at Costas Opa. After eating, I walked her to her car where we talked some more…until a cop arrived and gave her a ticket for being 10 minutes over her parking. Grr.

Before that happened, we met one of Fremont’s shop dogs (pictured above).

For dinner, we barbecued and had our neighbor and a few friends over to play Zooloteria and Cartagena. 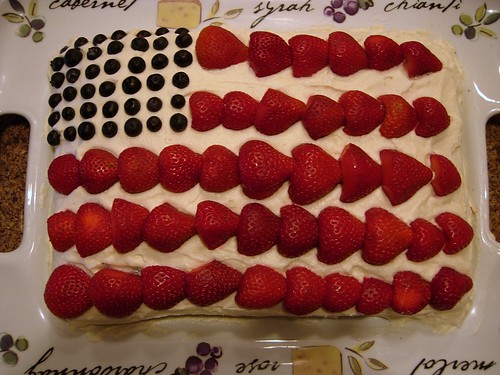 We spent most of our day at home. In the early evening, we headed to Geraldine & Rand’s to celebrate & watch fireworks. Seattle only had one show this year — on Lake Union.

As the fireworks started, their neighbors invited us over to catch a better view. They shared refreshing beverages, Geraldine shared some of this patriotic cake she baked.

This cake was so perfect, you don’t even know. 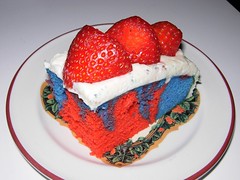 All proper outside, psychedelic inside! 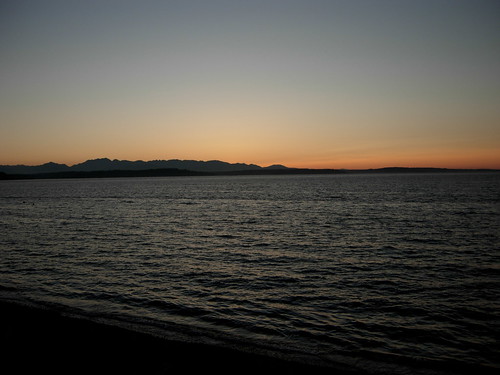 We visited Vanessa’s again tonight — met Heather & got some quality time in with Keaver and Natala while we were at it!

This is one of the things I really love about Seattle: Alki.