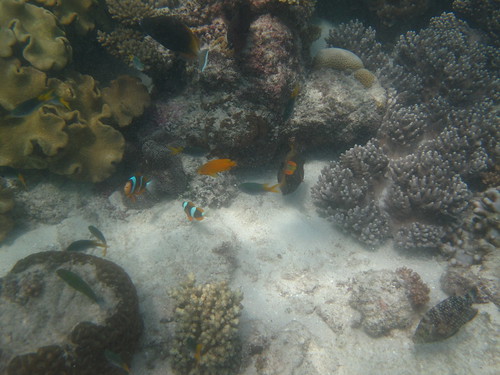 Dear family and friends, sorry for the lack of updates! Been a little busy, not on a computer. Visited the Great Barrier Reef today. TTYL. 🙂 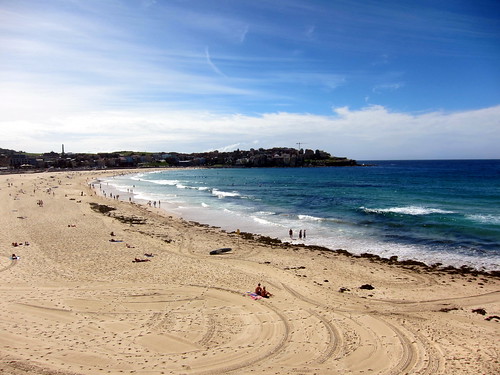 Before my trip, a Seattle concierge told me he’d lived in Sydney in college and if there’s one thing I must do in the area, it was the Bondi Beach to Coogee Walk. This is a 6 KM coastal cliffwalk from popular Bondi that takes you past Tamarama, Bronte Beach, and gives you great views of Gordon’s Bay. We used our hop-on/off bus to get us out there and back, but we trekked the footpath length on our own biped power.

Today really taught me how great Sydney-siders have it. Mr. T & I couldn’t think of another international city with such close proximity to sparkling beaches and pleasant weather. We were thrilled with all this sunshine! 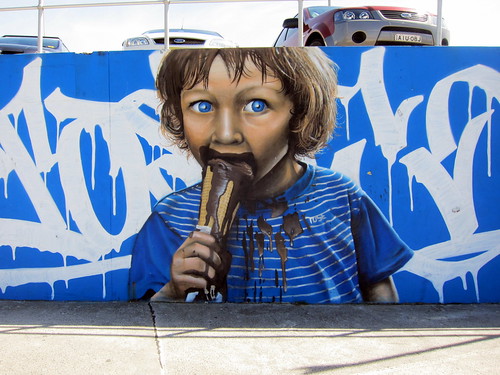 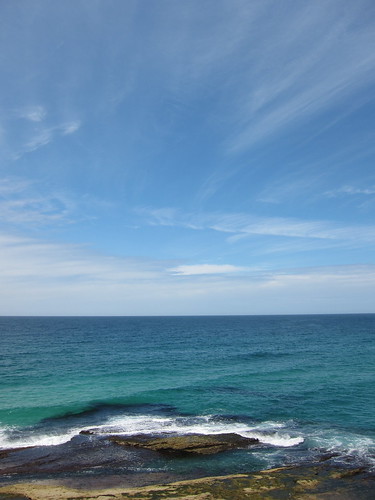 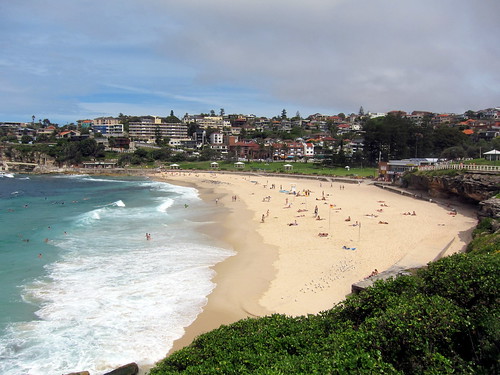 We refueled midway at The Bogey Hole Cafe (mostly unmemorable). Except, I did find the Door to Narnia nearby: 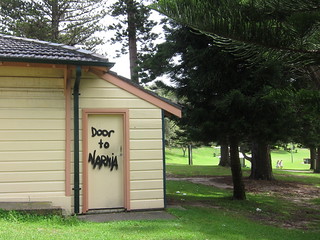 We followed our morning of walking with a visit to yesterday’s find in Chinatown’s Eating World: Gumshara Ramen. This was the thickest, fattiest broth I’ve ever come across, but that ramen sure was memorably delicious. The chef onsite offered to thin it down to our preferences. While I’m not scared of fat like I was way back in my teen years, I did need to go back once to him to balance the broth. Then, it was perfect. 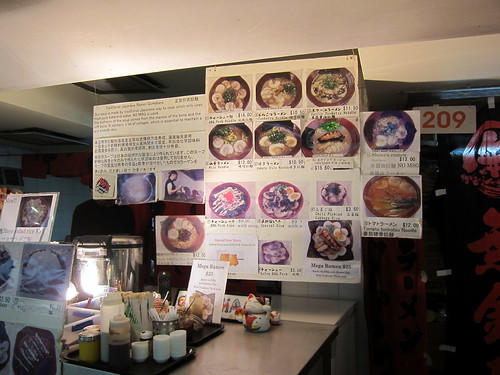 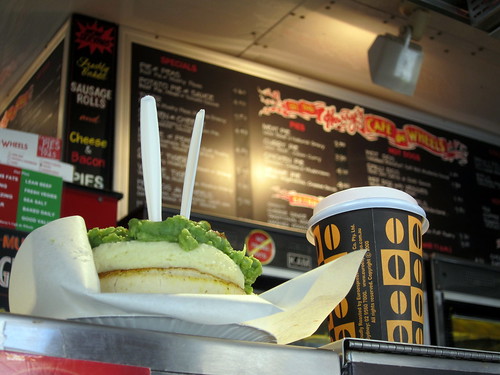 An old family friend relocated to Sydney a decade ago. In her advice, she suggested we take a hop-on/hop-off bus tour around the city to familiarize ourselves with the hoods. We were jet-lagged and this sounded easy, so we went for it. Plus, one of the routes would be a massive logistics help and time-saver for reaching Bondi Beach (tomorrow).

Today, we rode the entire main route with a few detours. This ride itself took hours longer than they advertise, but as suggested, it gave us the overview we needed to approach the rest of our week-and-a-half in and around Sydney. It was much easier to sort out public transport after today.

We took our first detour at Woolloomooloo for Harry’s Cafe de Wheels for Aussie Pies (pictured above). We ordered Harry’s Tiger: the house special with beef pie served with mushy peas, mash & gravy. Great lunch! And they had their food truck-style dining going long before American hipsters did. 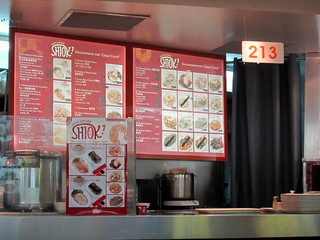 Later, we took another detour at Chinatown for laksa at Eating World’s food court’s Singapore Shiok. Mr. T seriously loved his laksa and asked if we could just eat this from here on out. The portions were so large, we only needed to share one bowl. It was a delicious, cheap meal — so budget-friendly yet satisfying for poor Americans suffering from sad exchange rates.

(I emphasize this rate situation a lot, but after expecting the Euro or the ruble to make me feel poorest, it was a shock to discover the most disadvantageous rates would be in Australia! You get what you pay for though, and the place is so lovely while being functional and overwhelmingly friendly that it’s worth every penny. Aussies give US Southerners a run for their hospitality trophies.)

After a disco nap, we ventured out to Pocket Bar and Shady Pines Saloon. These two bars are within a short walk from each other in Darlinghurst. 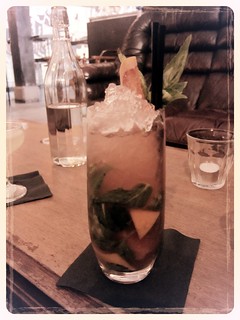 At Pocket, as basil was in season, it needed to show up in my glass. On par with the best cocktail spots in the US. 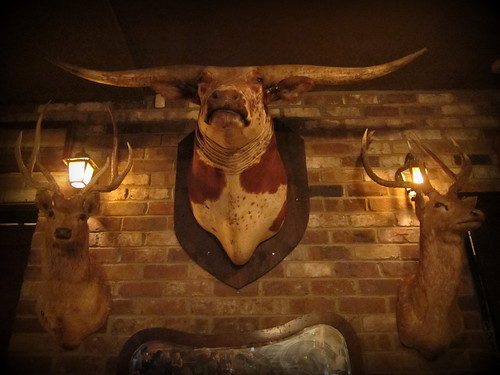 At Shady Pines Saloon, we were greeted by steers. This place is an amazing slice of Texas situated in central-ish Sydney. We ordered a House Special, before we wrapped up our night: 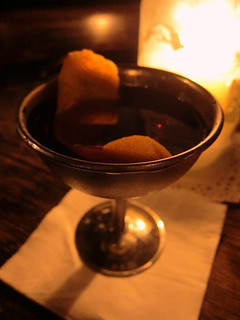 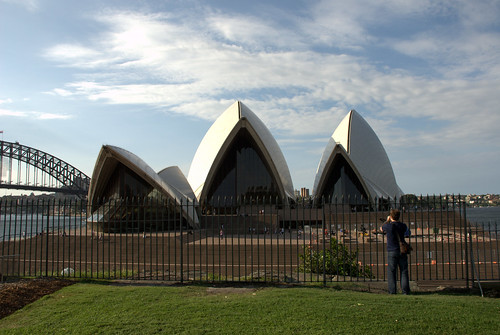 Mr. T arrived to meet me today! I showed him my extensive learnings of the gardens the day before, with a special stop above the Opera House and harbor/harbour. 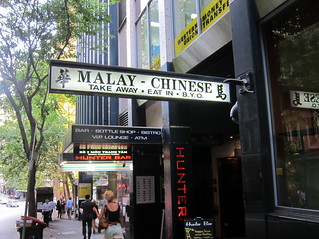 We also found his favorite dish–laksa–at Malay-Chinese Takeaway. It’s an excellent yet delicious choice for Americans suffering from a poor exchange rate. 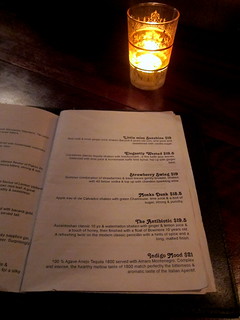 We settled our evening at Stitch. Try the Little Miss Sunshine, if you can, at Stitch. Right up my alley with ginger, chili, rum, lime, and vanilla sugar. 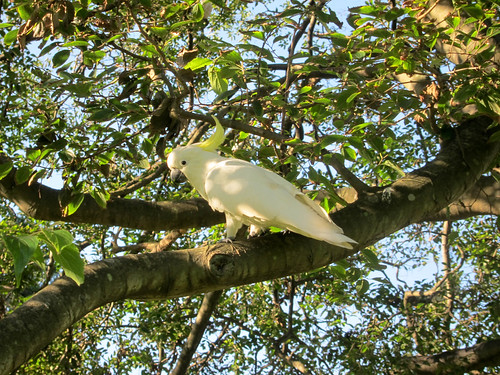 For my first day in Sydney, I spent extra time in the Royal Botanic Gardens. Highly recommended, easy to access from The Rocks and CBD, free, and boasts waterfront and wildlife views. This place will make you fall in love with the city. 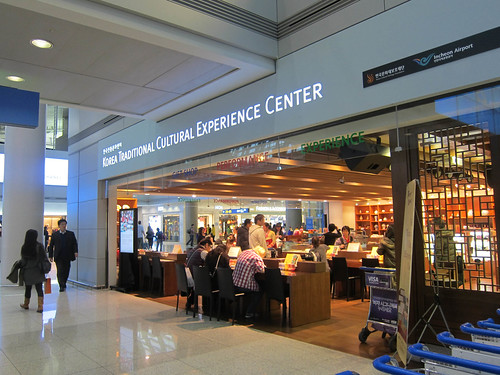 Things that are grueling: 3 flights in a row to Australia, with two hours separating each leg. Grueling is worthwhile for a select few journeys, and today was one of those.

I started my trek on Alaska Airlines before dawn and switched over to Korean Air in SFO. Did you know that in the domestic terminals at SFO, there are no screens indicating where you should go if you next leg is international? I was not expecting to be disoriented so soon, before I’d ever left the country. I was saving these feelings for Beijing.

In much the same way I approach my life, I just kept moving and asking questions of anyone who held a vague sense of authority or intelligence despite also knowing the answer may never come.

Lucky for me, I found a suitable answer to “Where do I go now?”, one I could live with to get me on my way today. It did involve checking in all over again despite having done so in SEA. (Turns out Alaska is small potatoes and their standard boarding passes are not approved in SFO’s international terminal. This was additional salt in the wound from the night before where AK wouldn’t let me check in, in advance. Hrmph.) Well, whatever, I didn’t complain since I had my eye on a prize on the other side of the TSA: the Air France lounge. I barely had enough time to read the charming coverage of rural Louisiana in the AF mag (EN FRANÃ‡AIS), before heading off to pre-boarding.

As they closed the doors at SFO, I heard the flight attendant tell another traveler that it would be 12 hours to Seoul. WAIT, WHAT? STOP THIS TRAIN I HAVE TO GET OFF.

SFO-Seoul flight time was a detail I hadn’t cared to pay attention to before that moment. This is hilarious when you consider that I’d previewed the layout of my cabin on Google image search and watched videos of the sleeper-chair I’d have and I knew a week ahead what I’d be ordering from the in-flight menu. Bibimbap for lunch, Beef Galbi-Jim for dinner. I guess the flight time never mattered in the overall scheme of things. Then or now, really, cause it was just going to be awhile.

I’m lucky enough to be flying in front cabins for the vast majority of this grand adventure, but the constant movement took its toll nonetheless. As I slogged across Incheon’s airport, I marvelled at how sloppy & underdressed I felt for such a fancy mall.

Korea’s invested quite a bit in this airport — there was a classical singer performing with an audience in one section, and I spied several Korea Traditional Cultural Experience Centers (Naomi had told me about these!). They’ve mostly upstaged Singapore, if you ask me. And if you overlook the archaic security checkpoints where they went so far as to pull batteries out of my camera for closer inspection. Singapore’s too efficient for that nonsense.

Had I not been so exhausted and in need of recharging at the Korean lounge (can you hear the tiny violin?), I would have stopped in the Center pictured above for a little traditional Korean craft time. Crafting! Can you think of anything more soothing before a flight that doesn’t involve a prescription? Next time, Incheon. 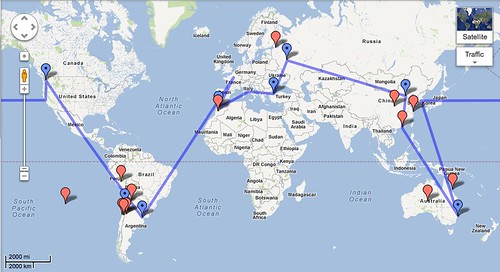 I’ve been quiet around here lately, since I was deep in prep for my next big thing: a trip around the world. I’m posting this from the Korean/AirFrance lounge at SFO. Next stop: Seoul, then Sydney. More to come.