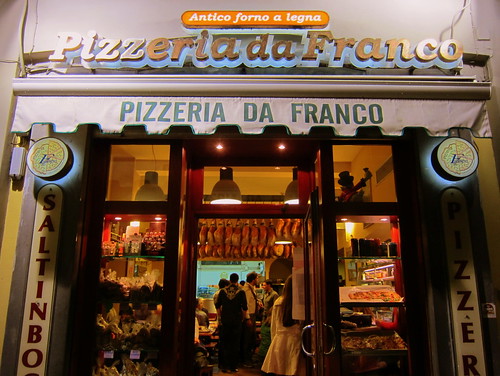 I wasn’t sure what to expect of Southern Italy. I can be pretty Type A. I like order. Schedules. Lists. Plans. Following those plans. Italy is legendary for mixing it up. The further south you go, even more so. Would I go crazy from all the chaos? Even more importantly, would the food be any good?

Good food isn’t a guarantee in Italy — during a 2004 trip, I encountered as many downright bad meals as decent ones. Foodwise, I’d been disappointed & resigned myself to not being into Italy. Maybe France was just more my speed? But. I also know I am in a very different place in my life now. I’m much better at finding good places; I’m much more comfortable traveling in unknown circumstances. I wanted to try it again, and not solo unlike last time. So when it came time to choose springtime honeymoon destinations and given our predilection for Mediterranean destinations, Mr. T & I decided it could be the perfect setting between the coastline, potential for great food, & plenty of things to see and do. The Sorrentine Peninsula! Pizza! Pompei! Panini! Capri! Lemons! Gelato! Positano! The Amalfi Coast! Sunshine!

We arrived shortly before noon in Napoli Capodichino. Between transit & late afternoon snacks & naps, we weren’t out for dinner in Sorrento until 9 PM. How southern European of us! We picked simple: a pizzeria written as curiously beloved by locals. Curious, as in, the author wasn’t exactly sure why the patrons packed the place despite the crowds & plastic silverware and disposable cups. Curiously packed & beloved by locals? This sounded like a recipe for success to me.

Yes, dinner blew my expectations away. I knew immediately we’d come to the right place. I considered the police officers waiting for their pizza to be a good omen. When our number came up & we were seated, I ordered pizza alla diavola & Mr. T chose a pizza with parmesan & arugula and some sort of prosciutto or ham or something. I’d give you the name, but it doesn’t really matter because anything these guys at Da Franco put on their pizza tastes amazing. Plus, it turns out there’s not standardization amongst titles and their corresponding ingredients. Each establishment interprets their pizzas as they see fit. Pizza alla romana can mean anchovies in one place where anchovies are the centerpiece for pizza alla siciliana somewhere else. That’s Italy! Always mixing it up!

This pizza was something else: the flavors amazing & the crust was cooked to a perfect char. It was refreshing to spend 20 euro on dinner for 2 when we’d been ordering a single entree in Dublin for the same.

We noticed everyone else polishing off their own pizzas, but Mr. T & I could barely make a dent in half. I caught our server’s attention to ask for a takeaway box. He winked, then demurred: “Of couuuuurse.”

Then he brought us this box. Oh, Italy! 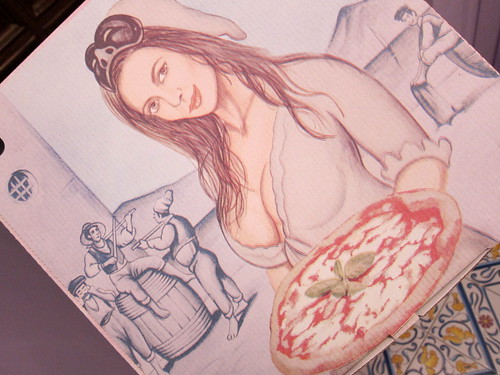 thanks for the pizza box pi…its hilarious i know. I was there recently also. Do you have any more pics of Franco’s? My camera wasnt wrking and I was trying to expain about the place to everyone here in OZ!

Yes, Ashlley! I do have some more pics…I hope to post them soon.