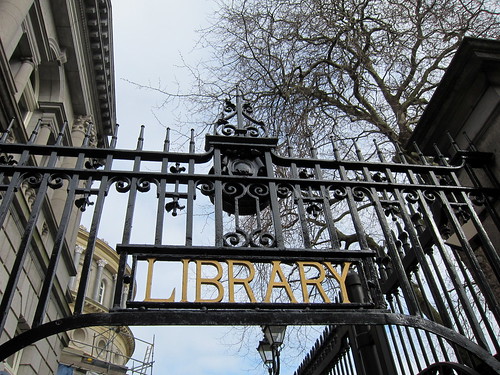 After yesterday’s packed itinerary, I slept good and long this morning. It was the first seemingly overcast day. My only goal was to head west to browse shops and maybe visit the National Library or the National Museum (of Archeology). I puttered a bit getting there. Usually after an hour or so, I get Museum Brain — where my brain stops accepting new facts being hurled at it in all that dim, protective lighting — no matter how much I might love the subject matter. They don’t make higher priority in travel plans as they once did. Yet, it seemed nicely low-key & I was open-minded to stopping in. I’d read the library covered several famed Irish authors, provided genealogical advice for travelers, and had some Oscar Wilde hoopla going on. The Museum sounded as though it would give me context for wandering Dublin. Oh, and I love libraries.

I mistakenly thought it was Wednesday. Vacation mindset, eh? I knew the Library was open til 9 Wednesdays, so I hit up the Museum across the street first. Except, I’d taken so longer to wander west, that they were shooing everyone out of the Prehistoric exhibit when I arrived. (4:30 already? Where had the day gone?) I walked back to the Library and into the Keats Exhibition.

Beforehand, I didn’t know much about Keats but his salacious Occult fascination drew me in quickly. The exhibit was great! I half-thought it was too bad I was the only one in there, with full run of house. I surprised myself by really getting into watching all the videos & reading panels, when lo and behold, a very alarmed security guard found me. “What are you doing in here?!?”

It turned out they’d made last call an hour earlier when the other Museum closed and he had no idea how I’d made it in after closing. (Me either, I recall waving at a front desk lady as I walked in.) “It’s like you’re Home Alone in here! Don’t worry, ya ha’nt broken any laws around here.” And then he laughed away my apologies. I liked this guy.

We chatted for a bit more as he unlocked various systems and led me out to the sidewalk. It was great timing as the gray skies cleared while I was inside. Then he remarked, “Nice that the volcano ash looks to be going, idn’t it?” And I go, “…what volcano?”

2 replies on “Home Alone at the National Library”

I’m so jealous. I’d love to be locked away in a museum after hours!

[…] shopping & some last visits to places I’d investigated but wanted to explore further. The National Museum (of Archeology). It’s what you’d expect. Plus displays of thousand-year-old REAL bodies […]