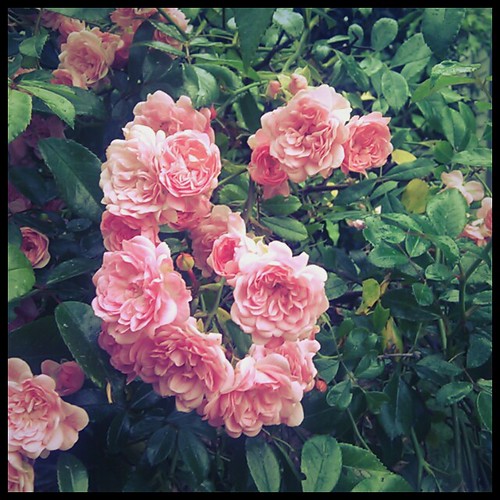 When I went to check the mail, finally took notice of neighbors’ lovely front yard.

Thanks to the Netflix fairy, tonight, I watched Anne of Green Gables, the Continuing Story, produced in 1999 as the 3rd in Sullivan Entertainment’s productions. WHAT WERE THEY THINKING? Internet gossip claims the director created a whole new story based on a rights dispute with the estate of L.M. Montgomery. The original magic was lacking. Diana turns into a shrew. Anne and Gilbert move to NYC for work, then Gilbert and Fred go to fight WW1? I was happy to see the same actors, but they all looked thin. I fast-forwarded through the Anne-in-London scenes to get to the closing reunions.

Megan Follows (who played Anne in all 3, and I still love her) has gone on record saying that she didn’t even watch the final cut of the 3rd movie. I don’t blame her. But I’m glad I watched it as I’d been mildly curious since I caught the Anne-in-a-nun-habit scene of this trainwreck on PBS a decade ago.

I hear there’s a fourth with Shirley Maclaine as Anne, where Gilbert is dead and Anne knew her father before she was orphaned? WHAT? Sacrilege. I will not be watching that.

Sullivan is no kindred spirit — he actually admitted in press interviews that he acquired some rights before reading the book as an adult and found the story almost too juvenile to create a movie. Kevin, you should be ashamed of yourself.

I was obsessed with the first two Anne miniseries as a child, then later LMM’s canon. At least we still have her books (I’ve reread the first 6 in Anne since May — they hold up for me).

And I was very amused to find the AOGG Drinking Game.