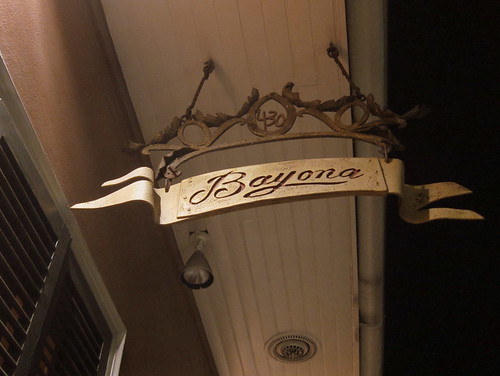 We flew to New Orleans via Memphis today. Weeks ago, I mentioned to Mr. T & we’d be arriving later than we normally do, so we fired up an online reservations site to see who could seat us at 10:30 at night. Bayona came to our rescue. I’ve been curious about the place for a better part of a decade, so jumped on the chance.

But first, we had a layover in Memphis to attend to. I wasn’t sure what to expect out of the Memphis airport — as major pit stops, Denver and Atlanta are pretty homogenized. Minneapolis, too, as far as the food goes, but their saving grace is the plethora of bookstores. I could handle the place stranded for a week or so with all those books. Although, Minnesotans know how to deal with the snow so it’s not as likely.

In Memphis, imagine my happiness to discover not one but two kinds of BBQ on hand in the airport. We overheard a pilot describe to another that there was one place that specialized in sweeter, another in spicier, so we went for the spicy at Jim Neely’s Interstate BBQ for our midday refuel. Good stuff. Mr. T declared that Brian would be proud to share the Neely name. 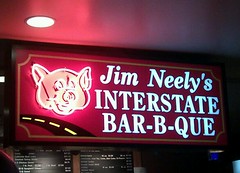 We arrived at our hotel around 9:30, got ready for dinner and sped down Dauphine to meet our reservation, a little early. Bayona was different animal than Interstate BBQ, but equally pleasing. What we ordered:
Stormy Morning: Elderflower Liqueur with Creme de Violette, wedge of lime & sparkling wine
Grilled Duck Breast (med. rare) with Pepper Jelly Sauce and Wild Rice (pour moi)
Flounder with rice, eggplant, and mushrooms in a soy, citrus, & teriyaki sauce (pour Mr. T)
Mocha Banana Torte with Pecan Croquante (pour nous), with a Happy Anniversary circling the plate.

The drink started us off on an excellent note — whoever is working the bar does it well. Both mains were on point, though we were surprised to find rice on Mr. T’s plate rather than the sobu noodle in the menu. It was late, we were tired, we were otherwise pleased, and didn’t bring it up with the waiter who seemed preoccupied with concerns other than visiting our table with regularity. It was approaching the end of the evening, I imagine, though the restaurant was still fairly busy. He made up for it by suggesting the delicious Mocha Banana Torte.

Dauphine Street seemed a ghost town at our departure hour, so we took the Bourbon Street on a Friday night gauntlet for our walk home. I suppose it must be done, from time to time.