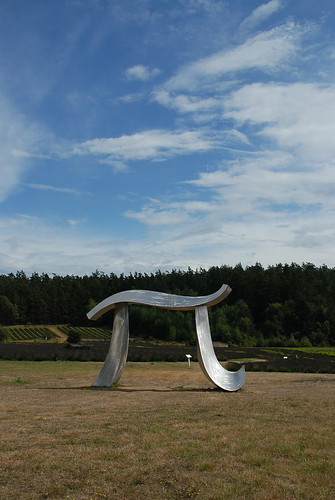 Behold: the Giant Pi. At the lavender farm on San Juan Island.

Last night during the UW-LSU game, Mr. T’s Dad suggested we take a daytrip up to the San Juans. I like to take visitors on a ferry ride while they’re here, since it’s one of my favorite things to do. I’d been thinking Bainbridge, since I’m familiar – I’d never been to the San Juans though have always wanted to go. I envisioned making elaborate plans for a first visit which seemed to stall efforts…see? Spontaneity is the way to go — without any over-planning, this morning, my mom & bro, Mr. T & me, and his parents headed north for a 10:55 Anacortes ferry time.

I’d heard of the Pig War over the years, but once arriving realized these Islanders seemed as reminiscent as some Confederate reenactment enthusiasts are about the Conflict between the States. (Or the War of Northern Aggression, depending on your ancestry.) As we settled into the Front Street Ale House shortly after noon, I noticed a poster soliciting participants in the “Pig War Re-inactment” (sic). So, you know, if you’re into that, head on up.

San Juan Brewing’s Front Street Ale House is great. Perfectly situated near the ferry terminal, with unique spins on pub menus and quirky proprietors. We sampled their Bacon Beer, but the swine was subtle to the point of being invisible. I had their Ale Braised Bacon Caprese Grilled Cheese. House-made bacon + caprese ingredients, all in a sandwich = it made my day. Most everyone else in our party had delicious tempura fish and chips. Mr. T & his Dad raved about the beer.

After lunch, we walked Friday Harbor then piled back into the van to check out the original American Camp, a lavender farm with massive sculptures installed throughout the grounds, Lime Kiln Point State Park for possible whale-watching, English Camp, then finally Roche Harbor. More pics are here. 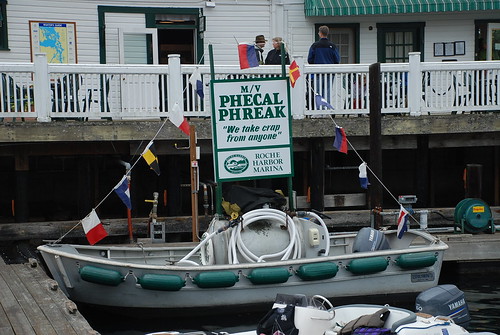 They take crap from anyone. (Nice!)

We made the 6:55 ferry back to Anacortes. We tried to patronize Anacortes’ Greek Islands Restaurant once on the mainland, but they close at 8. Instead, we hit up Esteban’s. I wouldn’t send anyone out of their way to a place that’s not exactly authentic but boy did this place nail its genre. Amerimex cuisine with good service, newly painted Autumn scenes in the windows, and unlimited chips and salsa. It was the perfect small-town end to a day reminiscent of my childhood road trips. We were home by 10:30. 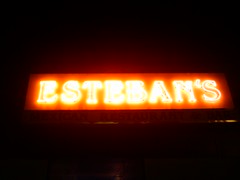 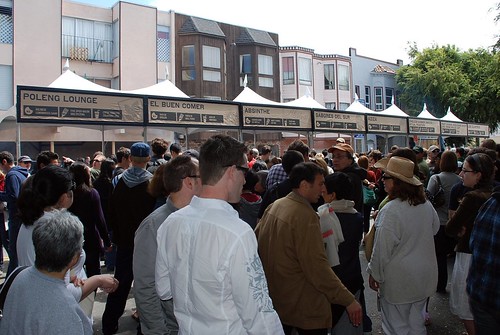 Two days into our trip, Mr. T’s coworkers talked of the Saturday San Francisco Street Food Festival. I know Seattle plans to have one soon in SLU, but this seemed like such great luck to have our trip coincide.

After scoping out massive crowds, we decided to hit up Humphry Slocombe first. Our ice cream flavors: Peanut Butter Curry for him, Ancho Chocolate + Cinnamon Brittle for me. I also tried Secret Breakfast (bourbon + cornflake), Prosciutto ice cream, and Pepper + Mint (wicked good). The day’s flavors are in this picture. 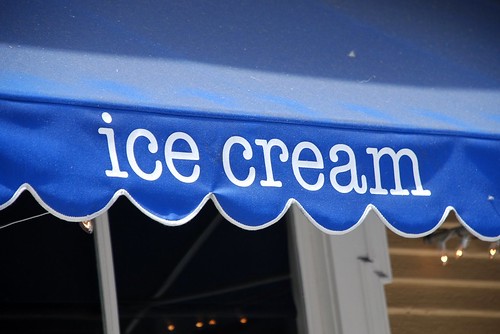 We headed back to the fair before waiting for another local friend to meet up with us. 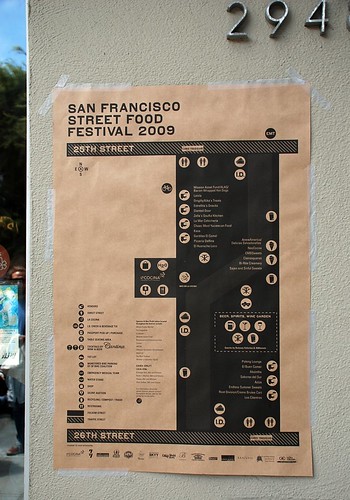 Crowds were deep. The festival was far more well-attended than organizers anticipated. And frankly I spent the last two days of our trip feeling full — the ice cream for brunch didn’t help matters. So I didn’t want to spend time in lines 50-100 deep. I wandered, looking for photo ops. The sheer variety of what was considered a small sampling of San Francisco’s culinary scene made me feel like I’d found my Mecca. 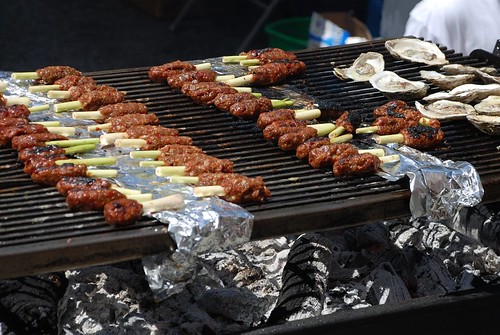 This guy looked like good people. I almost got in line after watching him work the crowd of onlookers. 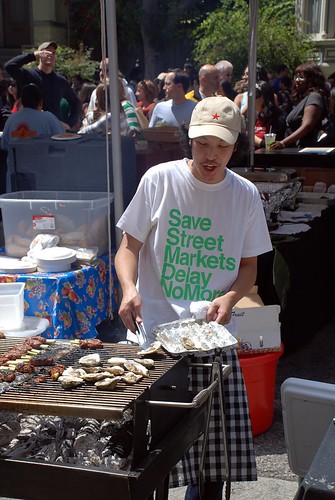 I know what to get gastrognome for Hanukkah: 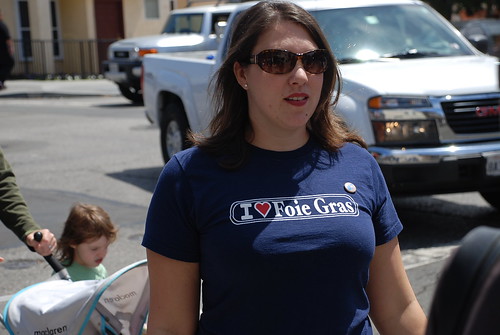 We hung around for the Mission for longer than planned since the neighborhood seemed a black hole for cell communication and there were a lot of crossed messages. Sadly, we missed out altogether on spending more time with a couple of folks, but Pete came out to find us since we had our plans a little more solid with him. He took us away from the Mission, into the fog through Golden Gate Park and over to the Beach Chalet. We hung out for a bit before heading back to SFO to return to Seattle.

See you next month, San Francisco! 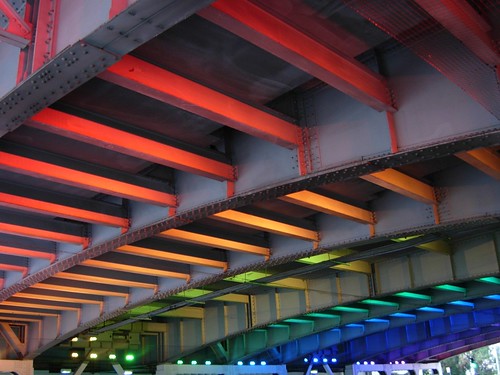 Mr. T’s colleagues travelled en masse to the Mission for lunch at La Taqueria. Dessert at Mission Pie put me over the edge. I was still full by dinner at Town Hall, where they were covering New Orleans’ greatest hits. I caught the bridge above during our walk back to the hotel.

Afterward, we met friends at Absinthe Bar & Brasserie in Hayes Valley. We’d met the owner in New Orleans in March…the drinks we tried in NOLA were great again, but anything new was a travesty. Ah well. Company of koroshiya & Jared more than made up for it. I hope we see ’em again on our next trip back to the Bay Area!

For this other picture – if Jen was our bartender at our first stop — Town Hall, our fellow patrons were right on: 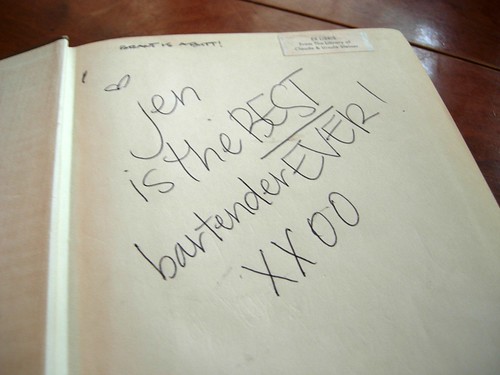 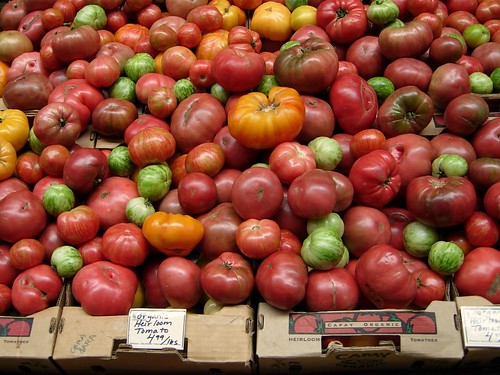 Today’s goal was Chez Panisse in Berkeley. I had an amazing lunch in the cafe: heirloom tomato salad + house made spaghetti arrabiata + Meyer lemon ice cream with Mexican wedding cookies. (I have a long history of loving those cookies, the ice cream just made it all the better.)

Afterward, I spent time in the Ferry Building near our hotel and took the picture at the top.

For dinner, we went to Anchor and Hope. We followed dinner with Rye SF. Both were marginal.

I still haven’t sorted it out, but I wasn’t compelled to take the “real” camera out today. Most were from my phone. 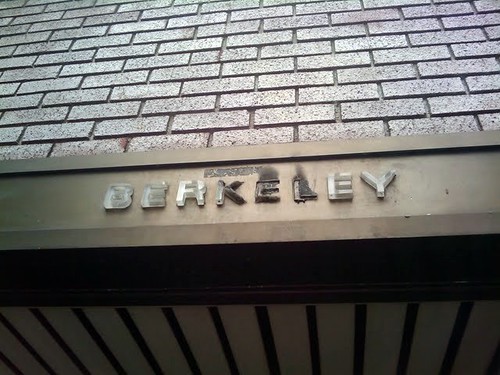 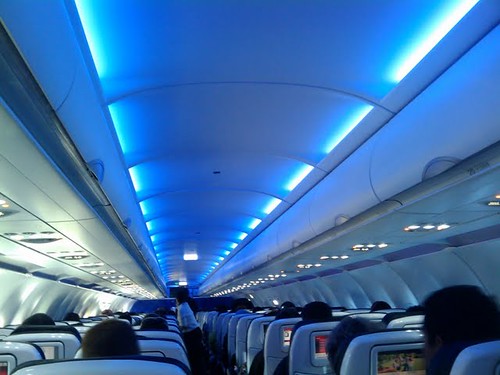 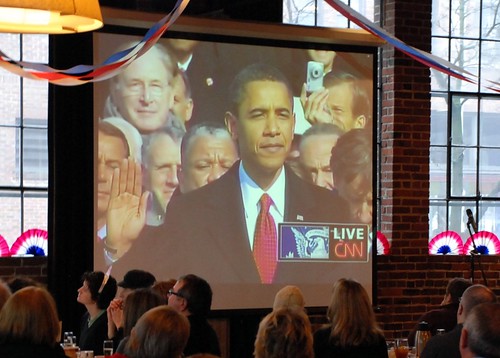 Our challenges may be new. The instruments with which we meet them may be new. But those values upon which our success depends — hard work and honesty, courage and fair play, tolerance and curiosity, loyalty and patriotism — these things are old. These things are true. They have been the quiet force of progress throughout our history. What is demanded then is a return to these truths. What is required of us now is a new era of responsibility — a recognition, on the part of every American, that we have duties to ourselves, our nation and the world; duties that we do not grudgingly accept but rather seize gladly, firm in the knowledge that there is nothing so satisfying to the spirit, so defining of our character, than giving our all to a difficult task.

This is the price and the promise of citizenship.

This is the source of our confidence — the knowledge that God calls on us to shape an uncertain destiny.

This is the meaning of our liberty and our creed — why men and women and children of every race and every faith can join in celebration across this magnificent Mall, and why a man whose father less than 60 years ago might not have been served at a local restaurant can now stand before you to take a most sacred oath.

So let us mark this day with remembrance, of who we are and how far we have traveled.

I started to write something very different about the morning I spent with friends at the Palace Ballroom downtown. I can sum that part up: excellent food, excellent company, followed by walking through downtown and the Pike Place Market. I reread Obama’s speech tonight, to capture a quote here and my thoughts moved in an alternate direction.

Since the election, I’ve studiously avoided naysayers and their negativity that would sap joy and my happiness out of this Inaugural occasion. I wouldn’t pretend I’m without any cynicism as I have years of habits to undo. But it’s remarkable how stark and ugly and, frankly, confining it seems now. I’ve noticed that this shift in avoiding negativity in one aspect of my life was just ever so slight, but it’s becoming enough to change the ground beneath, beyond politics.

The inaugural address in full on NYTimes and CNN. 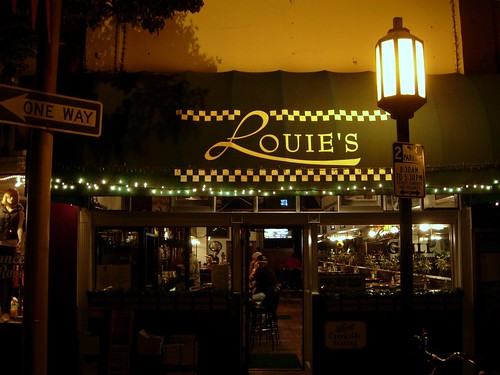 We spent last night in Portland, as planned. As I always expect with the Ax, we had a late, late night in the PDX, leading to a late start south to Ashland. He is a brilliant host and was in rare form Friday night.

We arrived in time for the end of a Wedding Eve BBQ. Then, we narrowly skipped the chance to see Comedy of Errors at the Oregon Shakepeare Festival. But, Mr T was hungry. As he’d so kindly driven the entirety of the 8 hours from Seattle thus far, I didn’t push the issue and we bid Captain Amy and the Butcher to have fun while we wandered the town.

Ashland makes its name catering to the Festival-goers. We’re lucky to have found Louie’s, a place with American standards (burgers, pizza, fancy sammies, tacos) with a nod to bistro presentation but not the prices. The food was excellent and the setting was nearly perfect.