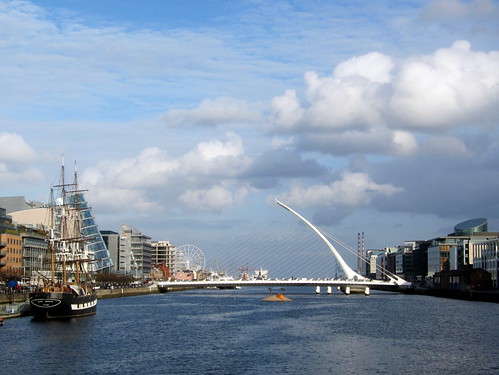 Late this afternoon, I met up with a Seattle friend who just relocated to Dublin. We headed over to the Dublin Oktoberfest at St. George’s Dock. They channeled Munich well — the entire festival smelled like sausage and beer and sauerkraut and pretzels.

For the first time this week, the sun broke out from behind clouds as we walked home along the Liffey.

That little island in front of my favorite Dublin bridge (the Samuel Beckett) with the orange tent is an art installation for the 2011 Fringe Festival — No Man’s Land/No Man is an Island. An artist is supposedly living there during the entire Fringe Fest. Later, a cabbie told me the conspiracy was that he had a trap-door to a warm room below. Conspiracy!