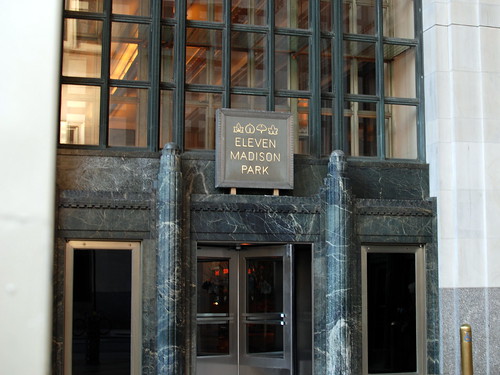 Encouraged by a friend‘s good experience at Eleven Madison Park on Monday, I followed suit today. Everything about the three-hour experience was on point. One can select either four or five ingredients from the menu — I chose four. Four courses turned into more and I wished I’d remembered the advice to forgo breakfast. Thank goodness my friend takes marvelous pictures and catalogs them so well — I was able to gather images of the dishes we had in common into a gallery that you can view on Flickr here. If you want to see more of his work, he’s got a great FoodPr0n 2010 set, amongst others.

As I was bursting at the seams and more full than I could ever remember, I laced up my running shoes and hit the road for a bit. Six miles to be exact. I charted a course from Chelsea to the South Street Seaport’s TKTS booth where I could pick up a solo ticket to a Wednesday Broadway matinee. I didn’t time the run so well. By the time I reached lower Manhattan, I felt like a salmon running upstream against all the bankers after the closing bell. At the ticket booth, I settled on a show called Elling. The seller told me these were my best choice — a single seat at only 8 rows back from stage. I also liked that the story was set in Norway, where one side of Mr. T’s family originated. 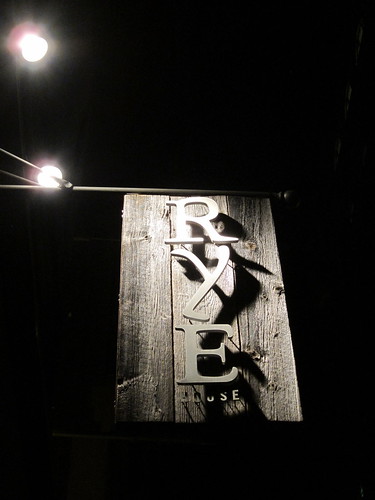 I ran back & got ready for dinner with Mr. T at Rye House. I’d found my selection based on a sandwich guide I’d read before I’d even gone to lunch today — the Pittsburgh. When it arrived on my plate, I realized what I’d gotten myself into: andouille sausage on rye with coleslaw and french fries INSIDE the sandwich. I took a picture to submit to “This is Why You’re Fat.” It was delicious & too much after the lunch I’d had, but I squirreled most away for a Wednesday morning brekkie. We also checked out some of their other Rye offerings. 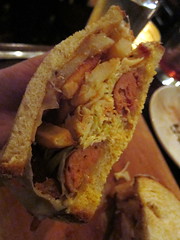 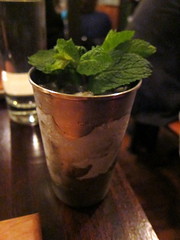 Then, my friend Kate arrived in town with her colleagues! We met up with them at an izakaya called Sake Bar Hagi near Times Square. I had zero interest in eating, but from what I saw, it’s a place I’d recommend and return to on future visits. 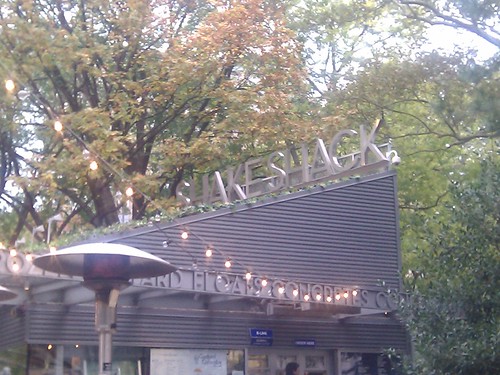 I ended up working so much today that I didn’t eat until 3PM. What? Fortunately, our apartment was a few blocks west of the over-publicized Shake Shack. As a Burger of the Month Club devotay, I had to check it out. I ordered a regular cheeseburger, and picked up a Pumpkin Concrete for Mr. T. It was basically pumpkin pie mixed up with ice cream. Burger was very good. To reward my diligent work, I also picked up a Peanut Butter Hot Chocolate thing they had going on. Then, I worked some more. 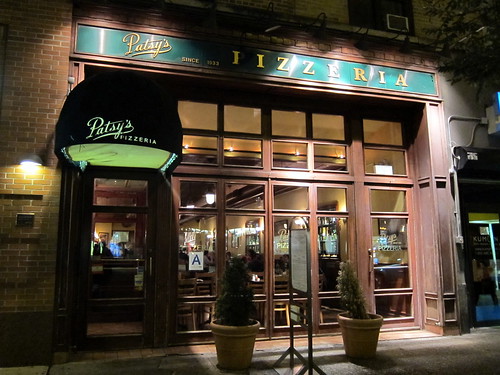 Once Mr. T finished with his work, we decided to check out a local pizza place, recommended by a New Yorker friend as a solid neighborhood chain. We ordered pizza with pepperoni and their Insalata Siciliana. I don’t think Mr. T was as impressed with it as I was, but I liked how much I felt like we were off the beaten traveler path…almost the opposite of exotic: comfortable. 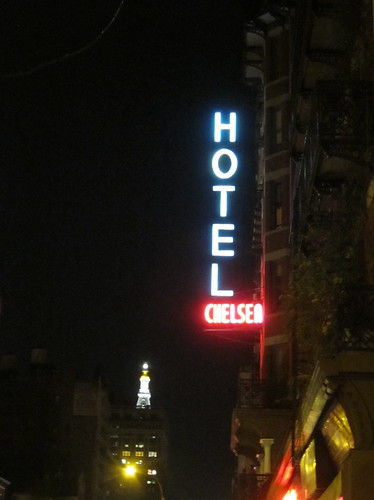 Then we walked home through Chelsea.

Essentially, we began our day by walking to the Bowery for DBGB Kitchen and Bar. For all my plans of having brunch, I went with a fancy hot dog called the DGBG Dog (from their sausage menu). I dunno, it just felt right. The sausage was made at DBGB and came with their “299” relish. Good. It even showed up on a porcelain hot dog tray. Mr. T went a traditional route with Oeuf Forestiere — “two eggs “en cocotte” with wild mushrooms, gruyere & fines herbes.” 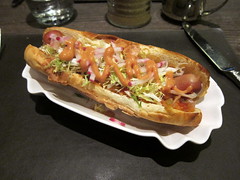 We walked a few miles back to our place, pausing briefly before walking north through Times Square to spectate at the NYC Marathon finish line. 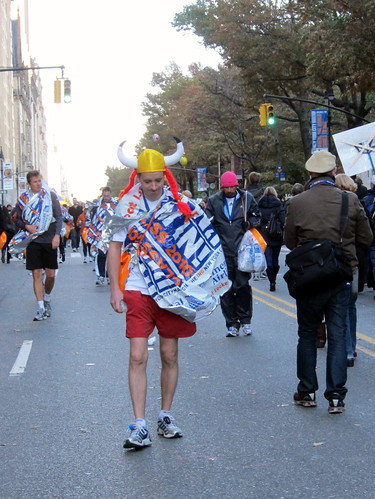 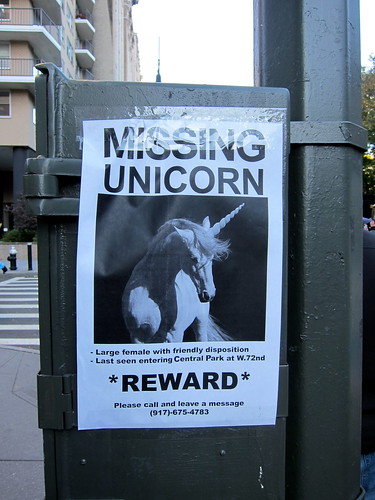 Being in Central Park had us in the right location to check out H&H, a NYC institution of the kind Mr. T missed on prior visits: bagels in situ. Total honesty here — between the indifferent staff and an average-tasting bagel, they didn’t seem to have much worth writing home about. It was much like our underwhelming pizza experience here in 2005. It just didn’t happen. I preferred comparing & contrasting potato vs. sweet potato knish at Zabar’s more. (Fortunately, better bagels appeared later in the week.)

We kept walking to regain some sort of appetite before walking MORE to Locanda Verde, in Tribeca. And at this point, I’ll yield on commentary to point you in the direction of the blog post written by my friend, The Gastrognome, who recommended LV to us. We really enjoyed it, as she did.

Then, we cabbed it home. I say we deserved that after logging over 10 miles for the day. 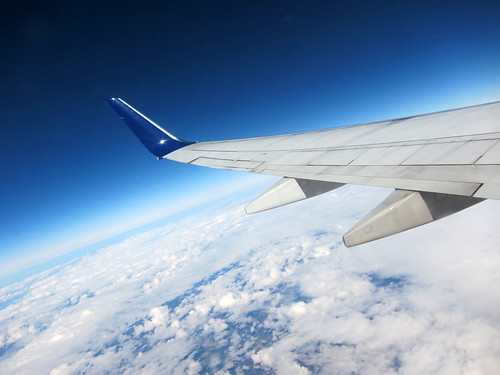 Mr. T & I flew to NYC this morning, landing mid-day. First stop: the massive & impressive new Eataly, Batali’s new Italian food emporium. It was only two blocks from our place in Chelsea and held us over for a few hours.

For dinner, we visited The Breslin, a new establishment next to the Ace Hotel & Stumptown Coffee. (Pacific Northwest REPRESENT!) We were drawn in by the spectacular Garden Tonic, but that Lamb Burger is worth making room & time for in any visit to the city. Our window seat had a view of the Empire State Building, from the south side. The Breslin’s on West 29th, not far from Broadway. 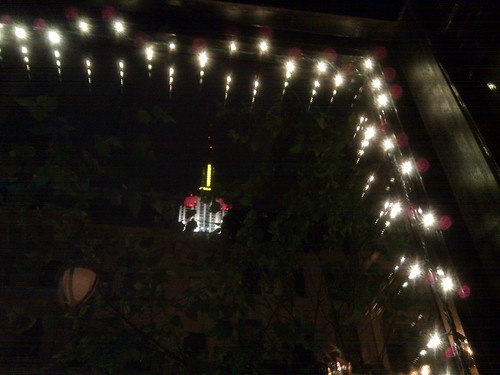 We took the super long way home, heading north by 20 blocks to see what Times Square is up to these days. 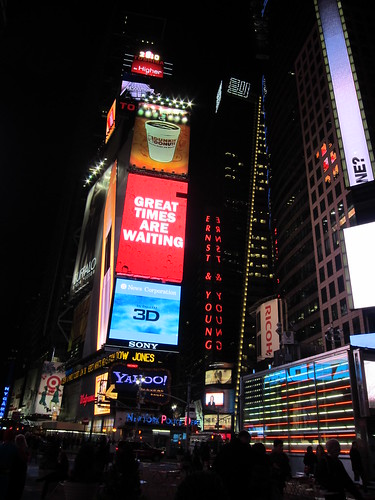 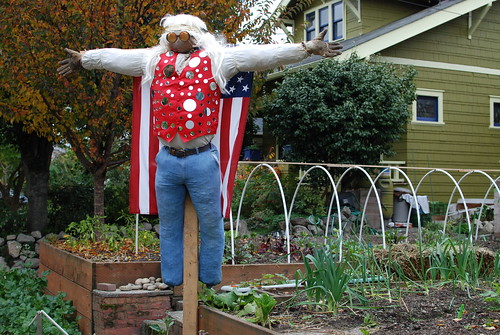 I’ve noticed this fella all week, as I’ve driven down Greenlake. He morphed from a more traditional character shortly before Election Day. 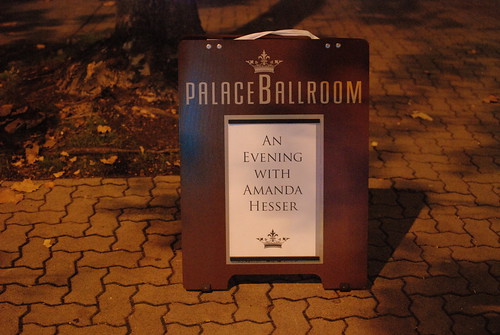 I love Kim Rickett’s book events. She brings wonderful authors to the Seattle area to speak about their work. Tonight at the Palace Ballroom, we listened to Amanda Hesser talk about the creation of her latest book: The Essential New York Times Cookbook. 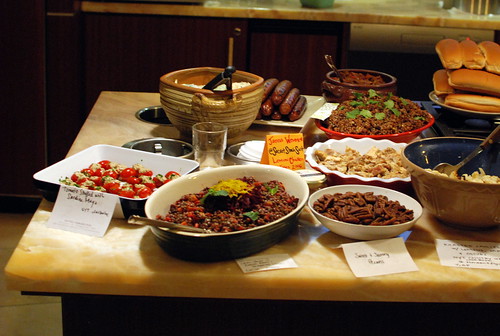 Amanda Hesser is in town for an event tomorrow evening, so tonight Viv hosted one of her classic potlucks at The Dorm. All who attended brought a dish from the New York Times, or from one of Amanda’s books.

After spending time with her this evening in such a small group setting, I’m an unequivocal fan. She’s witty, charming, and delightful to be around.

Later: birthday dinner for motomotoyama! It was a big evening. 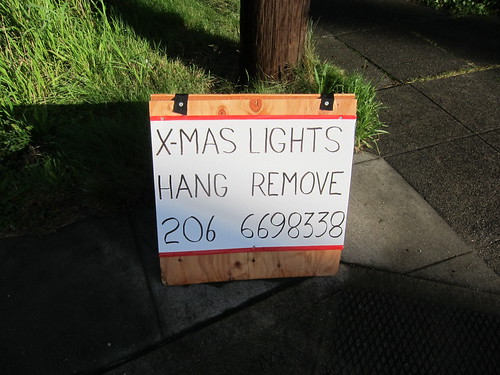 More of that local entrepreneurial spirit, again. Need to hire someone to hang your lights? This is your person. As seen on Queen Anne. 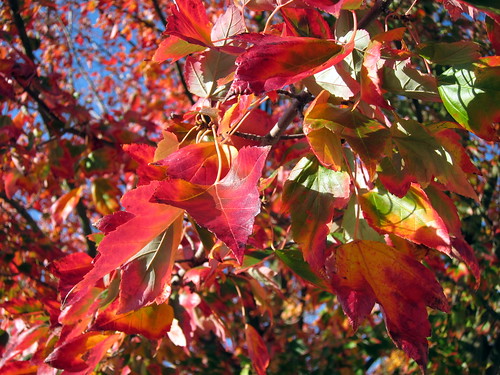