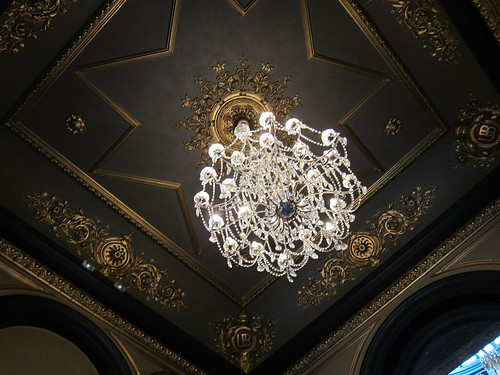 The lobby of the very posh Merchant Hotel.
All week, we debated where to head for the weekend. 4 out of 5 cab drivers voted for the Wicklow Mountains & Mr. T’s colleagues for Galway & Connemara. But last night I made a reservation for a rental car to take us to Northern Ireland for a first night in Belfast & a day in the country with a stop at the Giant’s Causeway. I was an International Relations graduate of the 90’s & had spent my share of time writing papers on the Irish Peace Process. I wanted to see Belfast. Sunday would be checking out the countryside, to see the home of some of my ancestors who lived in the Ulster Counties before they made it to America.

As this morning’s driver took us to the agency at the airport, in typical chatty Irish fashion, he asked where we were headed. I replied quietly and skipped over the Belfast part, “…County Antrim” (the county on the northern coast of Northern Ireland). He countered with an “Oh dear.” And never mentioned it again. It turns out many Dubliners have hung onto old notions and outdated fears of The North.

Mr. T nominated me for the driving given my one day of experience in the southwest. We hit the M1 & 20 minutes in when I realized the flake of a car agent at Dublin Airport Hertz (who ended up being full of misinformation regarding tolls and returns and whatnot) was incorrect about a full tank. Grr. After a checkin call to let them know our displeasure & to credit our account accordingly, we’d catch a gas station before the Northern Ireland border — gas is cheaper in the Republic than in the UK. Except, there was no sign we’d crossed! So there we were at a Pound Sterling cash-only gas station with only euros 2 km north of the border. Allegedly.

We backtracked to a station that proclaimed “Proud to Be Irish!” A good bet & 45 euro of gas later for a half-tank, soon enough we were checking into the infamous Europa Hotel at lunchtime. We were peckish, so this was excellent timing for the Saturday St. George’s Market. It turned out to be one of the most enjoyable markets (for me) in northern Europe. There were stalls of a variety of foods with a notably more British bent than I expected. But better. At one stall, I went for the curry sampler. Mr. T went for the hog roast. 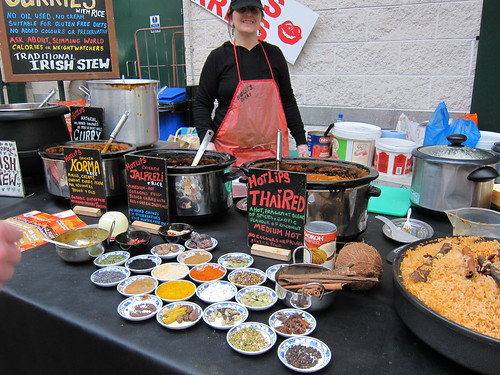 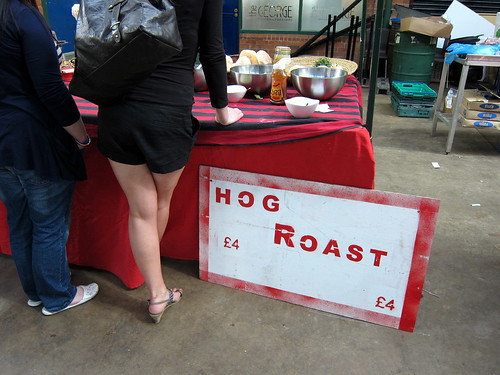 In my defense, she seemed to be loitering for a snapshot. 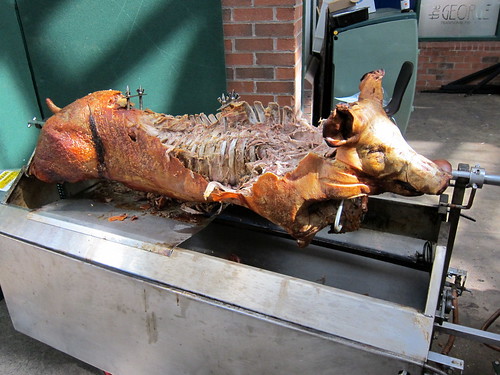 The takeaway options were as varied, as were the food products. 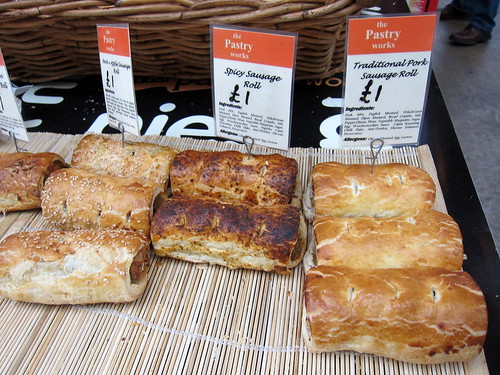 I tried the Spicy pie. 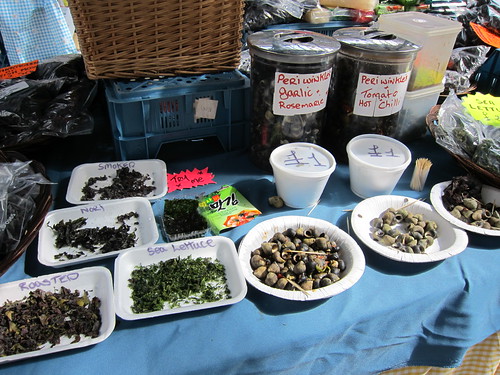 But skipped the seaweed buffet to contemplate the spice bins. 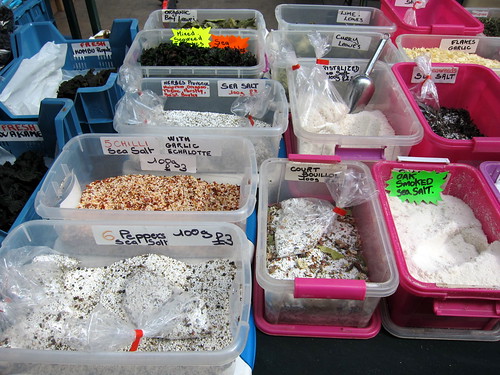 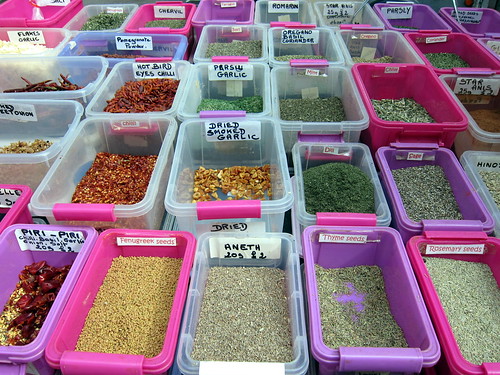 After lunch, we wandered a little more through some of the clothing stalls and a neighborhood or two before heading to The Merchant Hotel. 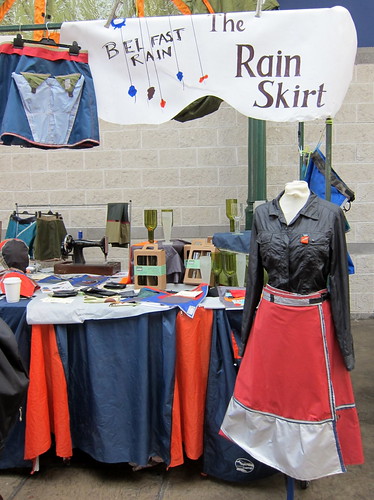 Have we any of these Rain Skirts at the fairs in Seattle?

I’d read somewhere that the Merchant had the most expensive cocktail in the world per Guinness World Records. Yeah, I wasn’t going for that, but some of their other noteworthy options. We chatted up the bartender (pictured on page 54 of the bar book, next to the Clover Club recipe) while the famed Afternoon Tea went on in the grand rooms next door. Sure, the drinks cost $15 USD, but this was absolutely the one experience where this was worth it.

After, we wandered Belfast with a shopping stop here or there and an illuminating Black Taxi Tour of Unionist (Protestant) areas, Shankhill Road, and “The Peace Wall.” Later we paid an early evening visit to the Crown Bar, noted for its private Victorian era “snugs” — booths with doors! I wish my pictures had done the booths justice. 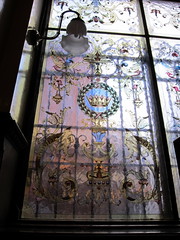 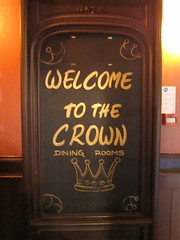 A friend in Dublin recommended some great restaurants like Deane’s or The Ginger Bistro…but it turns out the grounding of flights sent a lot of British to Belfast for hen & stag nights. We could only get a reservation at Cayenne for 10 PM. DUDE. Seriously? After a week without needing reservations in Dublin? After our luck in NYC where we walked in at Babbo & were readily seated? I half dreaded Cayenne — the restaurant had been on No Reservations (oh, irony!) and I worried it was over-hyped. But once Mr. T ordered that Irish lamb, the wait seemed so worth it: the best lamb we’ve ever had. You could sense the locally-raised, grass-fed impact more than any other meal we’d had. I don’t know how prawns with spicy lemon lentils & soy mayonnaise nor salt & pepper squid with nahm jim sauce could seem so magical but they were. I recognized the chef from that Bourdain episode chatting with customer friends; I’m convinced his presence after a brief period away promoting other places has raised the bar.

We ate so much we were grateful to happily walk home at the end of this great day, past many a drunk Brit, who freely swayed and shouted in the street. Certainly not hungry anymore: 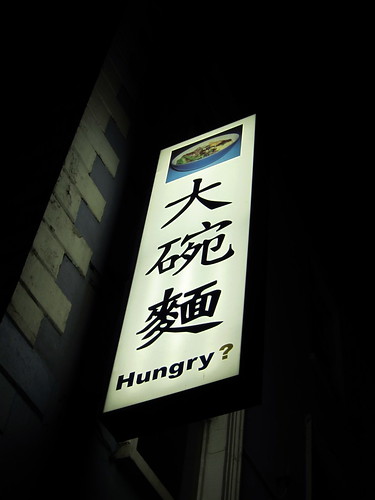