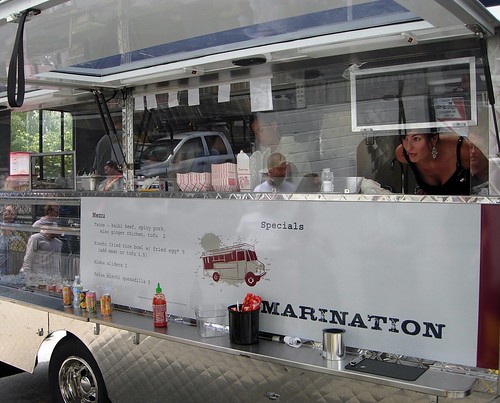 Today, the twitterverse was hopped up over the advent of Marination Mobile‘s first official day of business. Lucky me, it was in Fremont at Skillet’s usual haunt. I walked over shortly after noon, as it was advertised they were opening an hour later than usual.

The line ended up being 90 minutes long. Mr. T took one look and turned around — I discovered my friend Natala and her work team waiting in line, so I stuck it out to catch up with her and meet them.

My favorites: the pork Aloha sliders and the Kalbi Beef Tacos. I also tried the spicy pork tacos. I have to say, this was the first meal I’ve had in months that was spiced good and hot from the get-go. They knocked the socks off of Skillet’s recent offerings. I’ll be back, but no later than 11 next time.

One reply on “Marination Mobile Rolls into Fremont”