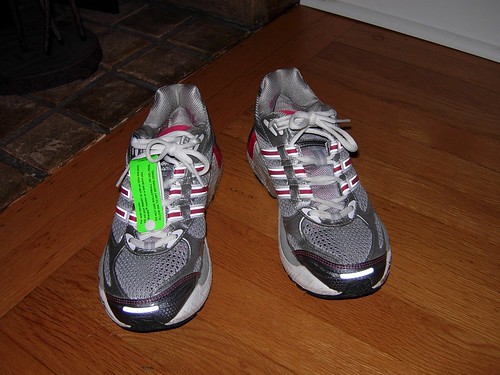 Shortly before the 20-miler, I realized I wanted replacement running shoes. The old ones’ right shoe picked up a squeak. This annoys after mile 1. Srsly.

I stopped at my local running shop for a new pair. Turns out they’d discontinued my beloveds. Bummer, as it’s a model that didn’t blister my left foot. (The right foot? Rarely an issue.) I’ve sadly learned these do not have the old magical non-blistering powers, despite being ultra-cushiony and not unlike walking on clouds.

Mr. T suggested more break-in time, though I’ve learned over the years that you shouldn’t have to do that. I gave them a week, or 36 miles. Tonight, I changed a variable in one final attempt and ran 4 miles. For once, both feet are wounded. Boo. I shudder at possible permanent damage given the mileage I’ll do through October 5.

They go back tomorrow, before the weekly long run (12 miles). I may go back to the old squeaks for the occasion. I can’t hear ’em with the iPod going.

One reply on “My ADIDAS”

Whenever I go to buy new shoes for walking, I simply say “Bring me whatever is ugliest this season.” Inevitably, that is what fits best. I pronate like nobody’s business, and apparently, the industry thinks that tortion control = FUGLINESS FROM HELL. I’ve gotten some REAL doozies in my time.