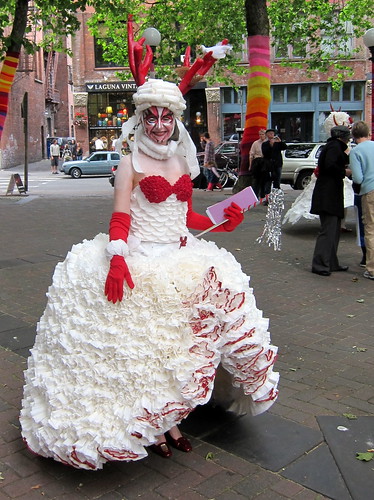 So far, I like how something unusual is always happening in the new daytime hood.

Tonight was First Thursday — the monthly artwalk for Pioneer Square. 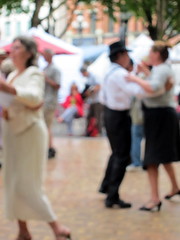 These dancers reminded me of Feria de Mataderos, in Buenos Aires. 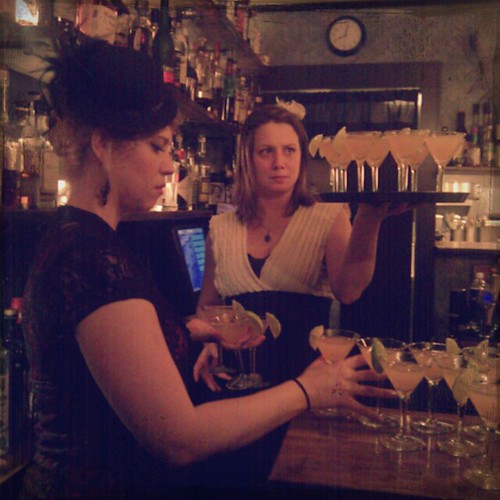 I started with Huey Long’s beloved Ramos Gin Fizz. It was the largest I’d seen. I’m not complaining, though when I realized a flight of 4 LUPEC specials were still to come, I introduced all my neighbors to the fizz. 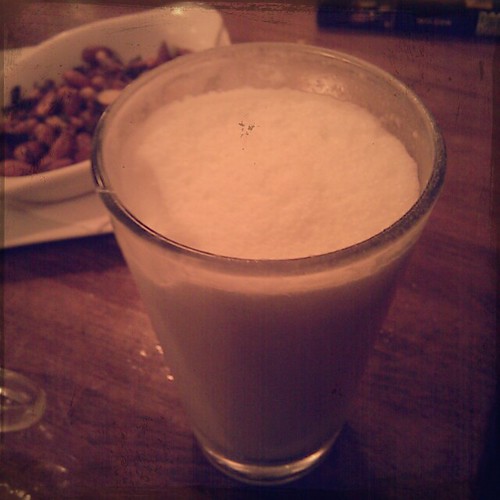 I’ll be getting this again. 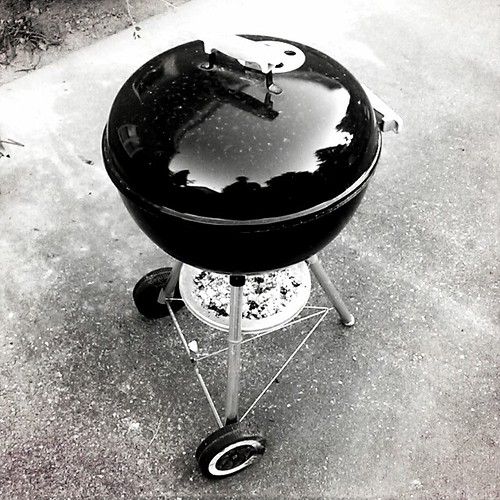 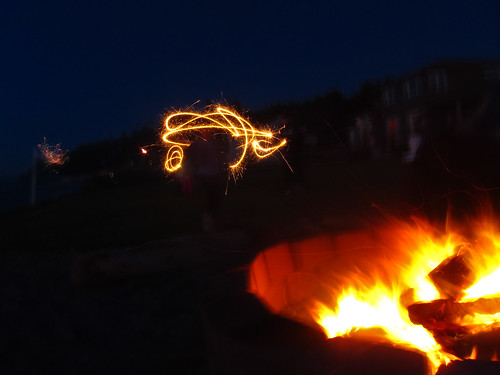 For our fourth of July festivities, we visited Mr. T’s family at his Aunt’s house on Camano. We ate crab caught off the back deck and corn and salmon and watermelon and you get the picture. It felt like Summer despite the necessary fleece. Then, there were sparklers! And firemen! (Not like that, they’re in the family.) 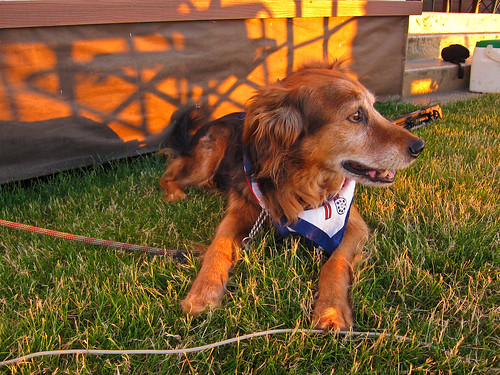 We brought The Baron to Camano with us. We had no idea how noisy our house would get without us, so it seemed like the thoughtful plan. He sat on my feet during most of the noise and held up pretty well during his flashbacks to Nam. 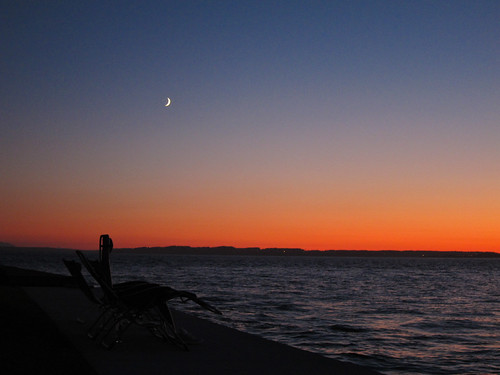 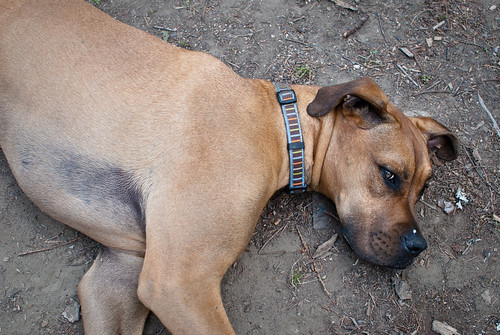 We all got a good night’s sleep and were up not so early to sit around the fire some more. At one point, we moved to the stream to enjoy our riverfront situation. Lots of folks had taken off already, so we had the place to ourselves.

I headed back to Seattle mid-afternoon, in time for dinner and a family birthday party. 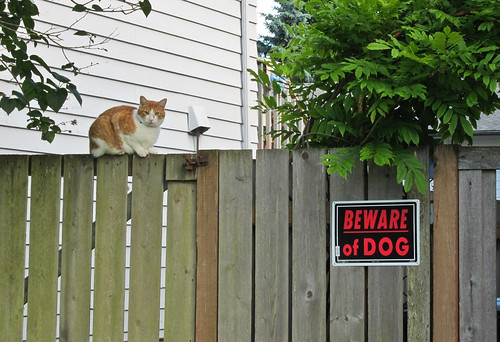 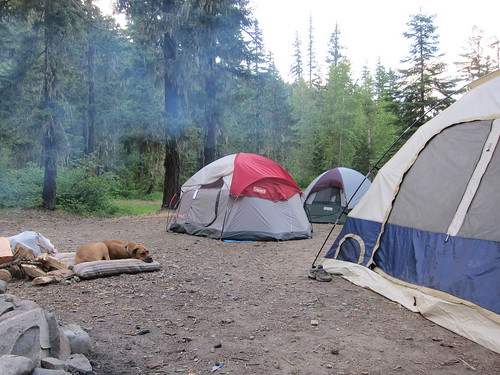 I wouldn’t, couldn’t have missed this camping trip.

Despite a few very minor setbacks in our trip logistics — once I hit the road, I found my friends’ campsite easily. Captain Amy found us a site near a runoff river from Lake Cle Elum. When I arrived it was past 80 degrees and the sky was perfect. 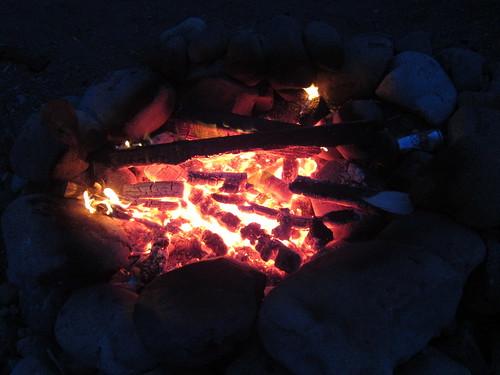 After dark, various neighbors we’d met during the day on the river came through our group’s camp area. We sat and talked and handed out marshmallows. The most memorable guest would have to be Jim, a loquacious yet friendly and well-meaning fellow who was a bit rosy around the neck. Jim showed up when he needed a break from the family squabble happening with the people he came with (not his kin, and never will be).

We got to chatting with and came away with our trip catch phrase:
That dog will not hunt.

Applied usage: If those crackhead campers two sites over start screaming about their missing pipe between 2 and 6 AM tonight like they did last night, THAT DOG WILL NOT HUNT. Ain’t happening. They been warned.

(Jim and another fellow brokered an agreement during the day amongst several sites, all banding together in the common goal of ensuring a good night’s sleep in the forest. It worked.)

The conversation veered into his recent past. Jim’s taking off soon for the Alaskan Highway. He worked in AK for years — half the year at the Pipeline, the other half here in WA, until he was injured in ’96. He divorced six months ago after 35 years of marriage. He’s been living in his camper.

He’s says he’s going back to a place where things still make sense. 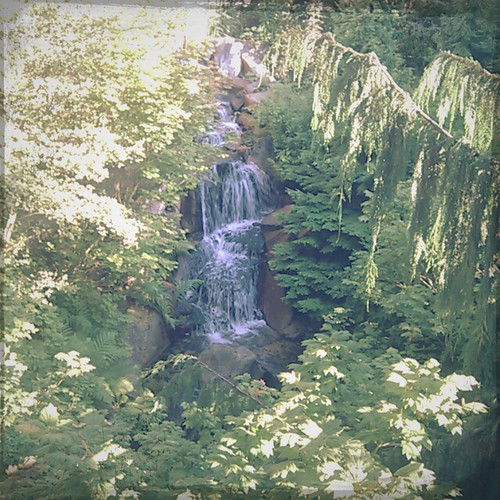 Tomorrow, I’m headed into the woods. Today was the annual stop at REI on my way out of town.